Lorraine was born May 21, 1921, in Wellsburg, Iowa, the daughter of Henry and Hannah Anderson. Lorraine attended public school in Wellsburg and graduated from Wellsburg High School. After high school, Lorraine enrolled at the University of Wisconsin at Madison. During her junior year she was hired by IBM. In 1939 she attended IBM School in New York and they moved her to Minneapolis, where she worked as a Systems Service Secretary.

In 1945 she was united in marriage to Dwight Stone-a long time N.S.P. employee. In 1947, IBM laid off all married women. In 1950, Lorraine went to work for the Minnesota School of Business as the Machines and Accounting Instructor. She worked until 1962.

Lorraine was an active porcelain painter.

She was preceded in death by her parents; and three male cousins. 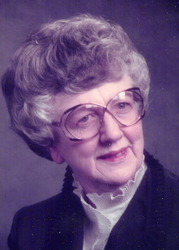