She was preceded in death by her parents; two brothers- James Ray and Charles D.; and an aunt, Lela Campbell. 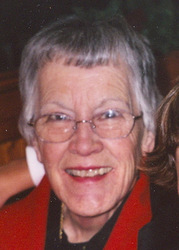