Gladyce Billerbeck, 75, of Reinbeck, Iowa, died Monday, January 21, 2008, at Covenant Medical Center in Waterloo, Iowa, of natural causes. Funeral services will be 10:30 A.M., Friday, January 25, 2008, at the Union Congregational United Church of Christ in Reinbeck, Iowa, with Reverend Joel Love officiating. Burial will follow at the Reinbeck Cemetery in Reinbeck. Visitation will be Thursday, January 24, 2008, from 3:00 P.M. to 8:00 P.M., where the family will be present to greet friends. There will be an Eastern Star Service Thursday evening at 7:30 P.M., by the Janesville Equity Chapter #6 Order of the Eastern Star. Memorials may be directed to the Union Congregational United Church of Christ or to the Shriners.

Gladyce was born February 5, 1932, in Traer, Iowa, the daughter of Lester William and Grace (Robbins) Untiedt. She received her education in Traer. She was united in marriage to Jack L. Roehr. They were later divorced. On June 7, 1974, Gladyce was united in marriage to Gaylord "Gig" L. Billerbeck at the Union Congregational United Church of Christ. Gladyce worked at several businesses in the Cedar Valley including John Deere, Hawkeye Community College, and Jim Cordes Ford. Gladyce became an Income Maintenance Case Worker, by the Department of Human Services. In the early 1980's, Gladyce passed her real estate exam and broker's license, allowing her to sell real estate. This was a passion that she kept her hand in until her death.

Gladyce was also a talented seamstress. She served as the Iowa Porkettes State Director from 1979 to 1984, for their Iowa Pigskin sales, not only promoting it's use, but creating many garments and crafts with it.

She was preceded in death by her parents; one son- Steven Roehr in infancy; two step-son-in-laws-Craig Willer and Kalvin Cox; one brother- Leslie Untiedt; and one sister- Evonne Untiedt. 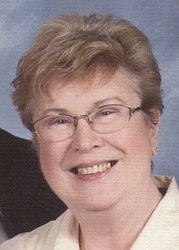