J. Viola Grimm was born May 30, 1907 in Dayton Township, Iowa County, Iowa, daughter of Connie E. and Elva Ethel (Sparrow) Grimm. She accepted Christ at the age of 14 and joined the Community Church of Deep River in 1921. On February 19, 1929 she was united in marriage to William J. Roberts and to this union were born a son, Melvin and daughter, Imogene. She lived on a farm in Iowa County until moving to Deep River with her family on January 1, 1941. She transferred membership to the Deep River United Methodist Church in 1944 and taught children's Sunday school for several years. Viola's husband died on December 10, 1953. After William's death Viola cooked in the Deep River-Millersburg School System for twenty years. She also owned and operated Dairy Crème during the summer months for 16 years. She moved to Grundy Center on August 3, 1983 and transferred her church membership to the Grundy Center United Methodist Church on March 11, 1984.

She was preceded in death by her parents and husband, and by brothers, Dean, Eugene, and Ernest Grimm; and sister, Ethel Lortz. 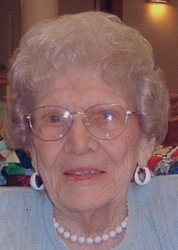