Douglas "Fritz" Geerdes, 78, of Wellsburg, Iowa, died Tuesday, January 1, 2008, at the Grundy County Memorial Hospital-Long Term Care Unit, in Grundy Center, Iowa. Funeral services will be 1:30 P.M., Thursday, January 3, 2008, at the Wellsburg Reformed Church in Wellsburg, Iowa, with Pastor Todd Rempe officiating. Burial will follow at the Wellsburg Reformed Church Cemetery, with full military rites provided by the Wellsburg AMVETS Post No. 91 and the American Legion Post No. 213. Visitation will be Wednesday, January 2, 2008, from 5:00 P.M. to 8:00 P.M. at Doyen-Abels Funeral Home in Wellsburg, and also on Thursday morning from 9:00 A.M. to 11:00 A.M. at the funeral home. The family will be present on Wednesday evening to greet friends. A memorial fund has been established.

Douglas Frederick "Fritz" Geerdes, was born May 9, 1929, in Milwaukee, Wisconsin, the son of Fern Mary Ross. He spent the first seven years of his life in Milwaukee and Appleton, Wisconsin. In 1936 Fritz came to Wellsburg to live with his mother and step-father Arthur H. Geerdes. On October 28, 1948, Fritz was united in marriage to Virginia Mae Aukes at Pleasant Valley United Methodist Church, rural Wellsburg. Also in 1948, Fritz enlisted in the United States Marine Corps, serving eighteen months in Guam. He was honorably discharged in 1950. Upon returning home, Fritz became employed by Gelder Construction in Wellsburg, working as a finishing carpenter for twenty-one years. In 1973, Fritz became employed by Fisher Controls in Marshalltown, working as an assembler until he retired in 1991. Fritz was a member of the Wellsburg Reformed Church where he had served as a past Deacon. Fritz carried the flag every year for the annual Wellsburg Memorial Day Parade. He enjoyed camping and fishing and loved spending time with family and friends.

He was preceded in death by his parents; two granddaughters - Amanda Dawn Murra and Aubrey Marie Geerdes; and one sister-Amber Svela. 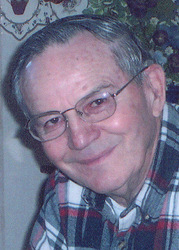