Carrie (Wubbens) Boekhoff was born June 15, 1910, north of Wellsburg, the daughter of George and Hattie (Hayenga) Wubbens. She attended rural country school north of Wellsburg. On October 10th 1951, Carrie was united in marriage to John Boekhoff at the home of her sister Tena Weber, in Ackley. They lived their married life in Wellsburg. Carrie was employed as a telephone operator in Wellsburg for nineteen years, and then became employed at Peoples Savings Bank for nearly twenty-nine years. Her husband John died in 1981, and she continued to make Wellsburg her home.

She was preceded in death by her parents; her husband John in 1981; three brothers, John, Clarence, and Fred Wubbens; and one sister Tena Weber. 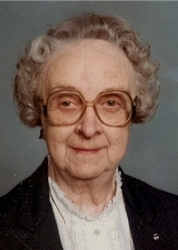