LYMAN COLE, a retired farmer residing in Grundy Centre, was born March 8, 1821, in Stanstead, Stanstead County, Canada, and is a son of Thomas Cole, who was the first male child born in Danville Green, Vt. The grandfather, Simeon Cole, served in the Revolutionary War. His wife swam a horse across the St. Lawrence River during the War of 1812, to take word to the people who were fighting for freedom. She was an aunt of Gen. John Sherman.

The father of our subject was married in Woodstock, Vt., to Sally Davis, and removed to Canada, where he gave his attention to agricultural pursuits, becoming an extensive farmer. He there made his home until his death, which occurred in 1836. His wife long survived him, and passed away in Mt. Carroll, Ill., in her ninetieth year. Lyman Cole was only about fifteen years of age when his father died. He then left home and went to Massachusetts and worked by the month in Lowell and other places. Subsequently he returned to Canada and enlisted in the Patriot War, continuing in the service for four and a-half years as a member of Captain Gilman's company. After leaving the army he was engaged as a peddler for two years in Illinois, and then went to Hazel Green, Wis., where he worked in the lead mines for two and a-half years. He next went to Mr. Carroll, Ill., and in Carroll County purchased one hundred and sixty acres of land from the Government and an improved tract of two hundred and forty acres. He was an early settler of that community, and there developed a fine farm.

On the 2d of July, 1846, Mr. Cole married Miss Emily F., daughter of Jonathan Cummings, one of the pioneers of Carroll County, and a native of Vermont. Mrs. Cole was born in Waterford, Vt., October 29, 1827, and when she was two years old, her parents removed to Crown Point, N. Y., whence they went to Chautauqua County, N. Y. In 1838 they came to Carroll County. Mr. And Mrs. Cole have five children: Bryon B., a farmer on section 4, Washington Township; Luella M., wife of Henry Dilly, of this county; H. A., who operates the old homestead; D. A., who is engaged in the land business and makes his home in Grundy Centre; and Delia, wife of David P. Wetzel, of Sumner County, Kan.

For ten years after his marriage, Mr. Cole resided in Illinois, but in 1856 he sold his property there and came to Grundy County, locating on section 8, Washington Township, where be bought two hundred and forty acres of land which he secured from land warrants at $1 per acre. It was all wild prairie, for the county was yet in its infancy. Mr. Conrad was the only settler in the southern part of the county, and Mr. Peck in the northern part. A few families were scattered here and there in other places, but the work of civilization and progress seemed scarcely begun. The nearest trading point was Waterloo, and their mail was received at that place. Indians were numerous, and they frequently camped in a grove belonging to Mr. Cole. As his financial resources increased, he added to his landed possessions until he had fourteen hundred and forty acres, the greater part of which he placed under a high state of cultivation. His first home was a log cabin, but in 1857 he built a frame house. His money was at one time reduced to a single dollar. He has known hard times, and has experienced the difficulties and trials of pioneer life, but through good management and enterprise he has become one of the wealthy citizens of the community. In 1884, he built the large and handsome residence that he now occupies in Grundy Centre, and has since lived a retired life, enjoying a well earned rest.

Mr. Cole has been a Republican since the formation of the party. He has held the office of School Fund Commissioner, and was County Supervisor for six years. He was one of the organizers and one of the first Trustees of the First Methodist Church in Grundy Centre, with which he and his wife hold membership. Mr. Cole is now a Director in the Grundy County National Bank. Besides his other possessions he has three hundred and twenty acres of land in Hancock County, Iowa, and one hundred and sixty acres in Dakota. He has given each of his children a good farm, but has still five hundred and sixty acres in this county. Mr. Cole has met with remarkable success in his business career, and though he began life empty-handed, he is now numbered among the substantial citizens of the community. 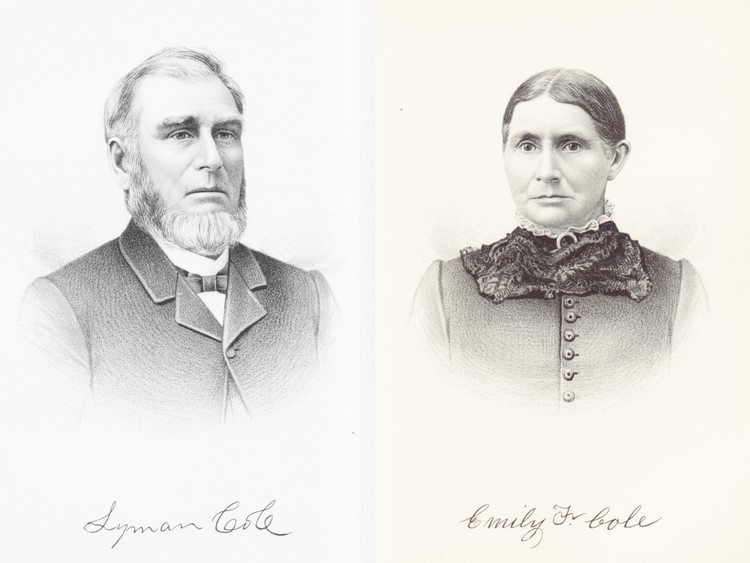