WILLIAM A. STRICKLER, who owns and operates a well improved farm on section 4, Melrose Township, Grundy County, was born in Franklin County, Pa., October 24, 1834, and comes of one of the early families of the Keystone State. His father, Benjamin Strickler, was born near Chambersburg, Lancaster County, Pa., in 1809, and when a young man went to Franklin County, where he remained until his emigration to Illinois. On removing to the west, he located in Mt. Carroll and bought a hotel and two farms, there making his home until his death, which occurred July 4, 1893. He possessed considerable inventive genius, and was a highly respected man. In 1831 he married Elizabeth, daughter of Henry Stock and a native of Franklin County, Pa. Both Mr. and Mrs. Strickler were of German descent. Their family numbered eight children, all of whom grew to manhood and womanhood, while five are still living. One son, Benjamin F., was a soldier of the late war, and died in Cairo, Ill., during the service.

In his political views Benjamin Strickler was a Republican. He was a very successful business man and became the owner of two hundred and forty acres of valuable land in Carroll County, Ill., besides a good hotel. He was noted for his industry and mechanical genius. In his youth he learned the cabinet-makers trade, and afterward became the manager and owner of a carding mill. In 1835 he went on foot from Pennsylvania to Illinois. He took great interest in sciences, and on the journey made a special study of plant life and geology. He was one of natures noblemen, and his life was ever upright and honorable. His wife was born June 16, 1812, and in her girlhood received religious instruction in the Lutheran Church, but in 1857 she joined the Methodist Episcopal Church of Mt. Carroll. She died March 6, 1892. She had lived a devoted Christian life, and had the love of all who knew her.

The children of the Strickler family were: Hiram, who died in young manhood; Elizabeth, wife of Henry Keefer, a druggist in Sterling, Whiteside County, Ill.; William A.; Susan, who is living in Mt. Carroll; Benjamin F., who died in the war; Mary Ann, deceased; Lavina, wife of Jacob Stakemiller, of Sterling, Ill.; and Samuel J., who is in the jewelry business in Salina, Kan.

Our subject was reared and educated in his native county, and at the age of twenty-one accompanied his parents to Illinois. He gave his father his services until January 1, 1861, when was celebrated his marriage with Savilla, daughter of Samuel Dersham, a native of Union County, Pa. She was born August 24, 1840, and the family removed to Carroll County, Ill., in 1858. Subsequently her parents removed to Jo Daviess County, Ill., where they are still living. They both hold membership with the Methodist Episcopal Church and are people of sterling worth.

Mr. and Mrs. Strickler began their domestic life in Woodland Township, Carroll County, Ill., and after three years removed to Black Oak, in the same county, spending two years in Salem Township. They then removed to Lanark, Carroll County, and a year later came to Grundy County. This was in 1867. They located on section 4, Melrose Township, where Mr. Strickler rented land for a year. He then bought eighty-nine acres, of which twenty acres had been broken, but there were no buildings upon the place. His present comfortable residence was erected in 1885. Good barns and outbuildings have been built, and all the accessories of a model farm are there found. Mr. Strickler engages in general farming and stock-raising, and for some years has also carried on the creamery business. He gained a high reputation for butter, and in the markets found a ready sale for the same. He kept as many as forty cows of his own, and also bought cream of his neighbors. His farm now comprises three hundred and thirty-seven acres of valuable land, and is recognized as one of the most desirable country homes in this locality.

Unto Mr. and Mrs. Strickler were born six children, but one died in infancy. Harvey D. is now at home. B. F. has made two trips to Colorado, and is now in Buffalo, N. Y., where he occupies a good position. In that way he is acquiring the means to pay his tuition in college, for he expects to become a minister of the Free Methodist Church. W. R. married Miss Alice Schulenburg and lives in Melrose Township, on his fathers farm. Cora A. is the wife of Ed LaRue, of Melrose Township; and Sadie completes the family.

In politics Mr. Strickler is a Republican, and has held the office of School Director for a number of years. In 1856, he united with the Methodist Episcopal Church, to which he belonged until 1882, when he joined the Evangelical Church; he has served as Class-leader and Trustee, and was Superintendent of the Sunday-school, which he himself organized. For a number of years he has also been Secretary of the church, and does all in his power to advance its interests. A well spent life has won him the high regard of all, and well entitles him to representation among the best citizens of the community. 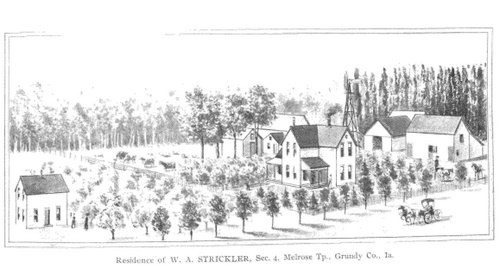