HORACE B. KELLY. The intelligence and ability shown by Mr. Kelly as a progressive farmer and a stockman, and the interest he has taken in the advancement of measures for the good of Grundy County, caused him long since to be classed as one of the leading citizens of this section. The property which he now owns has come as the result of his own efforts, and he deserves much credit for the determined way in which he faced and overcame difficulties that beset his path. He has been a resident of this section since 1875, and now owns two hundred and eighty acres of land on sections 23 and 33 Grant Township.

Born January 22, 1842, in Orleans County, N. Y., our subject is a son of Lorenzo D. and Jane (Hill) Kelly. His paternal grandparents were John and Sophia (Babb) Kelly, the former of whom was a native of Ohio, where his parents were pioneers, and was one in a family of thirteen children. The grandfather was a soldier in the Revolutionary War, and on going to New York State, followed the occupation of an agriculturist. He became the father of the following sons and daughters: Nathan and Frank, deceased; Lorenzo D., the father of our subject; Mary, deceased, and Harriet. John Kelly, who was an old line Whig, died when advanced in years.

The father of our subject was born in New York in 1816, and although never permitted to attend school a day in his life, by his own efforts obtained a fair education. His mother dying when he was only three years of age, he was taken into the home of strangers, and when very young, he began to make his own way in the work, his first employment being in a sawmill. He was thus engaged until reaching the age of sixteen years, when he was variously employed for some time, and after his marriage settled down to farming.

About fifty-five years ago, in New York State, the parents of our subject were united in marriage, the mother being the daughter of Franklin and Fannie Hill. She likewise was a native of the Empire State, in which state her parents were also born. After their marriage Mr. and Mrs. Lorenzo Kelly moved to Orleans County, the above state, where the father purchased eighty acres of timber land on the shores of Lake Ontario. He cleared forty acres of this, and resided upon it until 1846, when he emigrated to Dane County, Wis., there entering eighty acres of Government land. He and his wife are still living on that farm and are classed among the oldest residents of the county. He at one time owned a quarter-section of fine land, the greater portion of which he has divided among his children, he retaining only a few acres, which he still cultivates. The parents are members of the Methodist Episcopal Church. The father, who is a Republican in politics, has held many of the local offices, and with his wife occupies an honored position in the community.

Unlike his father, our subject has been given a good education, completing his studies in the high school at Madison, Wis. After receiving his diploma from that institution he entered Albion Academy at Albion, Wis., but that being the year of the outbreak of the war, he left school and enlisted in the Union army, joining Company K, Third Wisconsin Infantry. With his regiment he was sent to join the Army of the Potomac, and was present at the battle of Cedar Mountain. He had enlisted for a period of three years, but on account of disability he received his honorable discharge in 1863, having spent the greater part of his army life on detached duty, as steward in the Fredericks City Hospital, where he was also ward-master.

On being mustered out of service, Mr. Kelly returned home, and for a number of years thereafter was not able to do hard physical work of any kind. He learned the trade of a harness-maker, which he followed for four years, and in the meantime was married to Miss Jennie, daughter of John and Mary (Crummy) McComb. Mrs. Kelly was, like her husband, a native of Dane County, Wis., while her parents were born in County Down, Ireland. They were married in the Emerald Isle and soon afterward came to the United States, locating first in Pennsylvania, and on going to Wisconsin were ranked among the earliest settlers of Dane County. They were members of the Protestant Church in Ireland. Mr. McComb is yet living, and has attained the age of ninety years. The mother departed this life in 1892. While living in Ireland, Mr. McComb was a weaver by trade, but since coming to the United States has turned his attention to farming and stock-raising.

To Mr. and Mrs. Horace B. Kelly have been born the following named seven children: William, Charles, Mary, Gertrude, Winifred, Nettie and Logan. Our subject first began farming on his fathers land in Wisconsin, and after tilling the soil there for three years moved to Minnesota, and followed the occupation of an agriculturist for five years. In 1875 he came to Gundy County, this state, and purchased one hundred and twenty acres in Grant Township, but moved on his present fine estate some years later, and here he has since continued to make his home. Besides cultivating his fine farm, Mr. Kelly has dealt to some extent in real estate.

The Methodist Episcopal Church finds in our subject and his wife two of its most active and earnest workers. Socially, the former is a charter member of Reinbeck Lodge No. 386, I. O. O. F., and was formerly a charter member of Wilson Post, G. A. R., of Grundy Centre, but he withdrew from this post to organize Thompson Post No. 386, at Reinbeck. As an Odd Fellow, he is connected with the encampment at Grundy Centre. In politics, Mr. Kelly is a stanch Republican, and has held the offices of Justice of the Peace and Constable.

The brothers and sisters of our subject are: Charles E., George, Frank and Nettie. Annie E., Mary J., Hattie and Nathan are deceased. Charles was a soldier in the late war, becoming a member of Company D, Seventh Wisconsin Infantry, when only eighteen years old. As a member of the Old Iron Brigade he served his country for three years, and was wounded in the battle of Gettysburg. 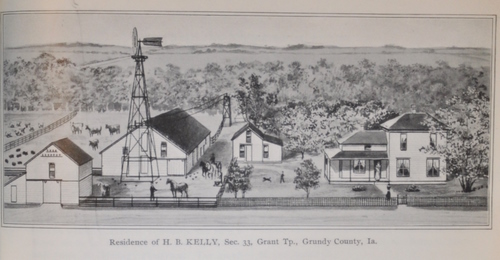