WILLIAM E. TOOGOOD. In these days of money making, when life is a constant struggle between right and wrong, it is a pleasure to present to an intelligent reader the unsullied record of an honorable man. To the youth it will be a useful lesson, an incentive to honest industry. Such a man we find in the subject of this sketch.

William E. Toogood was born in Somersetshire, England, town of Fifet, in 1838, and his parents, William and Elizabeth (Sanford) Toogood, were natives of the same place. His grandparents were Thomas and Elizabeth Toogood. The father of our subject, who was a farmer in his native country, was a man of considerable wealth. For many years he was a worthy member of the Episcopal Church. To his marriage were born seven children, as follows: Mary, now Mrs. Daniel Males; William E., our subject; Thomas and Barbara (twins) the former deceased, and the latter the widow of William Dutson; Arthur, Vinson and Sidney. About 1848 the father and family emigrated to the United States and settled in Dane County, Wis., where he bought one hundred and sixty acres of land. Later he moved to Lake Mills, Jefferson County, Wis., and there passed the remainder of his days. He became the owner of two hundred and fifty-five acres of land, and was a prominent stock-raiser. Mrs. Toogood is still living, on the farm in Wisconsin, and although seventy-eight years of age, is quite spry and active. When Mr. Toogood first came to this country he had considerable means, but lost a large portion of it by not being familiar with the ways of the country.

Until twenty-one years of age our subject remained under the parental roof and received his education in the district school. He then began working out, receiving $12 per month for his services, and continued this for four years, or until 1863, when he enlisted in the army, in Company M, First Wisconsin Heavy Artillery, and was stationed at Ft. Lyon, Va. He received his discharge in July, 1865, and attended the Grand Review at Washington, D. C. Returning to his home, he remained there until 1868, and then emigrated to Grundy County, Iowa, where he bought the one hundred and sixty acres of land where he now lives. He began at once to make improvements, and was the first to settle north of Black Hawk Creek, in that county. By industry and economy he has become the owner of four hundred and eighty-five acres of excellent land, all well improved and well cultivated.

When he first came to Grundy County, Mr. Toogood lived in tents for three months, during which time he broke the prairie of his farm. Before he got his first house built, a small residence, 16x24 feet, the heavy rains came and flooded his tent, and for some time he experienced many hardships. He was married in Grundy County, in 1876, to Miss Rachel Elliott, daughter of Arthur and Eleanor (Bothwell) Elliott, and a native of Canada. Her parents were both born in Ireland, and were early pioneers of Grundy County, Iowa. To Mr. and Mrs. Toogood have been born three children: Royal, Everett and Ada. When our subject first settled in the county, his nearest trading point was Cedar Falls, and for many years all was an open prairie around his farm. In the last few years he has been making many improvements in the way of buildings, etc., on his farm, and makes a specialty of stock-raising and feeding. In his political views Mr. Toogood is a Republican. He has been Township Trustee ever since the township was organized, and has been School Director for fifteen years. He and his wife hold membership in the Methodist Episcopal Church of Morrison, and Mr. Toogood is one of the Trustees of the same. Although but a small boy when he crossed the ocean with his parents, our subject remembers the voyage distinctly. They encountered many gales, and often thought that the vessel would go to the bottom. On its next trip it did go down. Mrs. Toogood's parents came over in 1836, and were about ninety days on the water. This was a disagreeable voyage also. 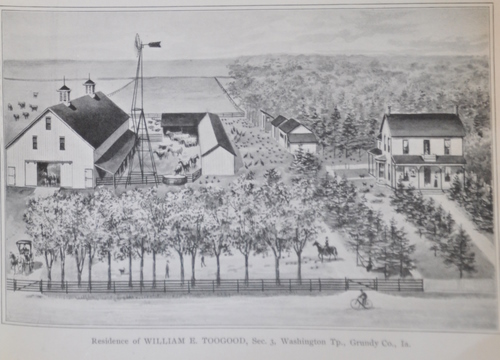