JOHN F. LYNN is the owner of one of the fine farms of Grundy County. He owns two hundred acres of valuable land, and the well tilled fields indicate the careful supervision of the owner. In 1882 was erected upon his farm a commodious and substantial residence, one of the finest country homes in the county. In the rear stand good barns and other outbuildings, where are sheltered fine grades of stock, horses, cattle and hogs. Mr. Lynn takes a just pride in having one of the best farms in the county, and it is to such men as he that the prosperity of the community is due.

Born on the 9th of April, 1847, Mr. Lynn is a native of Cumberland, Allegany County, Md. He removed then to Bedford County, Pa., and at the age of ten years went with his parents to Loudoun County, Va., where he grew to manhood and acquired his education. When a young man of twenty years he started westward, his destination being Grundy County, Iowa. Here he arrived in 1867, but about a year later, in the fall of 1868, he returned to Virginia, where he remained until the spring of 1873.

On the 15th of October, 1872, Mr. Lynn was united in marriage with Miss Laura Dowdell, daughter of Thomas G. Dowdell, a blacksmith and farmer. The year following he brought his bride to Grundy County, reaching Palermo Township on the 9th of March, 1873, when he purchased the farm upon which he has since made his home, with the exception of one year spent in Virginia. Unto Mr. and Mrs. Lynn have been born eleven children, and with one exception all are still living at this writing, in the winter of 1893-94. They are as follows: Nellie and Harry, who are now attending school in Iowa Falls; Effie, the third child, who died at the age of one year; Ralph, Walter, Bessie, Richard, Ercel, Grover, Fenton and Graham. The family is one of prominence in the community, and its members rank high in the social circles in which they move.

During the late war, Mr. Lynn enlisted in the Confederate service as a member of Mosbys Battalion, Forty-third Virginia Cavalry. At Snickers Gap he was taken prisoner, and was sent to Harpers Ferry; two weeks later he was taken to Ft. McHenry, thence down the bay to Point Lookout, and from there was sent to Savannah, Ga., where he was exchanged November 4, 1864. He then returned to his company, and continued in the service until the surrender of Lee, when he went to Winchester, where he was parolled. He saw hard service, doing scouting duty most of the time. He held the rank of Sergeant in his company. In politics, Mr. Lynn is a stanch Democrat. He has served as School Director, Road Supervisor, and was Township Treasurer for about twelve years. Faithful to every trust reposed in him, he proved a capable officer, hence his continued service. The community recognized in Mr. Lynn one of its leading farmers, and it is with pleasure that we present to our readers this record of his life work. 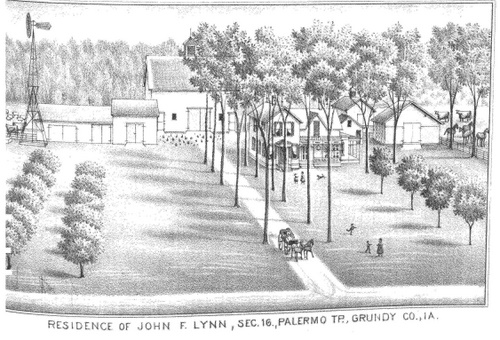