WILLIAM HARTMAN, who devotes his energies to agricultural pursuits, making his home on section 33, Melrose Township, Grundy County, claims Ohio as the state of his nativity. He was born in Sandusky County, February 29, 1838, of the union of Samuel and Mary (Baker) Hartman. The father was a native of Snyder County, Pa., and was a farmer by occupation. In 1834 he left the Keystone State, emigrating to Ohio. His father, Philip Hartman, also came and entered eleven eighty-acre tracts of land in Sandusky County. He had eleven children, and gave to each one a tract. He also entered six hundred and forty acres for himself, and there he made his home until his death. The family were pioneers of that community.

Samuel Hartman afterwards added to this land, becoming the owner of one hundred and twenty acres, all of which he cleared and improved himself, devoting his time and attention to farm work until his death, which occurred in 1885, at the age of seventy years. His wife passed away in 1852. They were the parents of six children, four of whom grew to manhood and womanhood, while three are still living: Henry, who is in the wholesale coal business in Denver, Colo.; Martin and William. The parents were both members of the United Brethren Church.

Our subject was reared to the age of eighteen in Ohio, and then removed to Lee County, Ill., where he made his home until his enlistment for the late war. When President Lincoln issued his call for three hundred thousand volunteers, he donned the blue, August 31, 1861, and was in the service for three years and ten months. He became Duty Sergeant of Company G, Tenth Illinois Infantry, and was promoted to the rank of Second Lieutenant. He participated in the battles of Island No. 10, New Madrid, Fts. Pillow, Donelson and Henry, Pittsburg Landing, Corinth, Nashville, Vicksburg, Iuka, Franklin, Murfreesboro, Stone River, Chattanooga, Chickamauga, Mission Ridge, Lookout Mountain, Knoxville, Dalton, Resaca, Buzzards Roost, Kingston, Rome, Dallas, Marietta, Kenesaw Mountain, Peach Tree Creek, Jonesboro, Atlanta, the march to the sea, Savannah, Four Oaks, Goldsboro, Bentonville, Petersburgh and Richmond. He was always with his regiment in the thickest of the fight, and whenever duty called was found at the front.

When the war was over, Mr. Hartman returned to Lee County, Ill., where he farmed for three years, when, in April, 1867, he made a trip to Grundy County, and the following year removed his family here. He was married in February, 1863, to Miss Martha, daughter of Daniel Morris, a native of Virginia and a millwright by trade. The lady was born in West Virginia, and died in 1870. In 1871 Mr. Hartman married Zelena, daughter of James Dunn. By his first marriage he had five children: Clinton, a farmer of Steamboat Rock, Iowa; William, who is located in Hardin County, Iowa; William, who is located in Hardin County, Iowa; Lyman Ross, who is living in Hardin County; Nannie and Stella. The children of the second marriage are Bertha, Myrtie, Cora and Agnes.

In April, 1867, Mr. Hartman built a house upon his farm, and that season he broke seventy-five acres of land. He now owns two hundred and forty acres of valuable farming land, which is well improved and under a high state of cultivation. In connection with general farming and stock-raising he had a large creamery on the place, which he carried on from 1882 until 1890. He built up a high reputation along that line and did a good business. The Melrose Stock Farm, as it is called, is one of the best in the county, being a valuable and desirable property. Socially, Mr. Hartman is connected with Union Lodge No. 310, A. F. & A. M.; Ionic Chapter, Lodge 100, R. A. M.; and the Grand Army of the Republic. In politics he is a stalwart Republican. His wife is a member of the Methodist Episcopal Church, and he contributes liberally to its support. An honorable and upright life has won him high regard, and he has won the confidence and good-will of a large circle of friends and acquaintances. 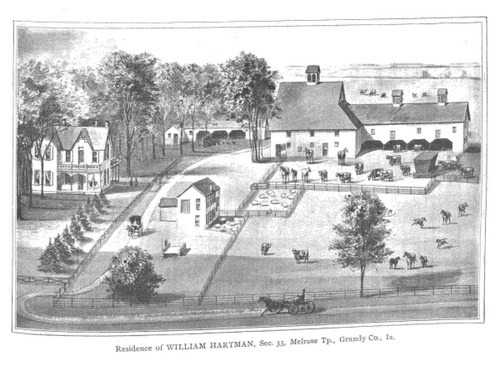