ARTHUR ELLIOTT. There are few men of the present day more worthy of honorable mention, or whose history affords a better example of what may be accomplished by perseverance and strict integrity than the subject of this sketch. He is now one of the prominent farmers in Black Hawk Township, Grundy County, and has a fine estate of two hundred acres located on section 18.

Born July 19, 1840, in Quebec, Canada, our subject is a son of Arthur and Eleanor (Bothwell) Elliott. His grandfather bore the name of Jeremiah Elliott, and was a native of Ireland. The parents of our subject were born near Enniskillen, Ireland, where they were reared and married. The father was a farmer in his native land, and there two of his children were born. He was the first of the family to emigrate to America, and he chose for his fist home the province of Quebec, where he purchased eighty acres of a partly improved farm.

Arthur Elliott, Sr., made his home in the above place until 1878, in which year he came to the United States, and purchased a quarter-section of land in Lincoln Township, Grundy County. There he was residing when his death occurred, about a twelvemonth later. His wife, who still survives him, is a very active old lady, and has reached the age of seventy-eight years. To them was born a large family of children, all of whom grew to manhood and womanhood. Those who are now deceased are: Catherine, Ellen and Edward. The living are: Anna, Jeremiah, our subject, Hugh (whose sketch will be found in another place in this Record), Rebecca, Sandy B. (she is also represented in this work), Margaret, Eliza, John and James. The parents were members of the Methodist Episcopal Church, and in politics the father was a true Republican.

Arthur Elliott of this sketch began at the age of eighteen years to make his own way in the world, and coming to the United States, made his way to Minnesota, where his first employment was working out on farms by the month. He was thus engaged until reaching his twenty-fifth year, at which time he was married and worked property of his own. The lady who became his wife was Miss Mary, daughter of William and Eleanor (Taylor) Dean. Mrs. Elliott was born near Belvidere, Ill., and later was taken by her parents to Ogle County, the same state, where she received her education and was reared to woman hood. Her parents were native of Ireland, and were farmers after coming to America.

To Mr. and Mrs. Elliott was born a family of nine children: William A., Elsworth, Herbert, James, Claud and Maud (twins), Mary, Edward and Hattie. Soon after their marriage, Mr. and Mrs. Elliott came to Iowa and located on the farm which the former purchased, and which comprised eighty acres. It now forms a portion of his present fine estate of two hundred acres, but which at the time it came into his possession was raw prairie land. Through industry and good management he has accumulated a valuable property, and ranks among the well-to-do agriculturists of this township. A Republican in politics, Mr. Elliott is not an aspirant for office, although he has, at the request of his fellow-citizens, accepted numerous local positions of trust. Mrs. Elliott departed this life at her home on the 13th of October, 1893, mourned by a large circle of friends. 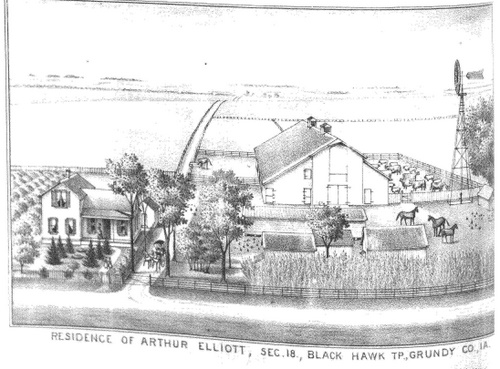