DANIEL DIEHL, one of the enterprising and highly respected farmers of Melrose Township, Grundy County, residing on section 2, owns and operates three hundred and twenty acres of valuable land, which through his own efforts has been placed under a high state of cultivation and supplied with all modern improvements and conveniences. In the rear of the comfortable home are good barns and outbuildings, and these in turn are surrounded by fields of waving grains. His residence, one of the best in the community, was erected in 1887, and his fine barns were built in 1893. There is no waste land upon the place, for drainage has prepared it all for cultivation. The owner also carries on stock-raising, making a specialty of the breeding of red Durham cattle and Clydesdale and Norman horses. He also raises Poland-China hogs.

Born on the 19th of November, 1832, Mr. Diehl claims Franklin County, Pa., as the place of his nativity. His father, Henry Diehl, was also born in that state, and was a member of the Lutheran Church. He continued in Pennsylvania for some years, and then removed to Whiteside County, Ill., in 1866. Purchasing land, he there carried on farming and stock-raising until his death, in 1890, at the age of eighty-four years.

In the district schools of the Keystone State our subject acquired his education, and at the age of nineteen he began earning his own livelihood by working as a farm hand. On attaining his majority, he left the east and went to Indiana. After a year spent in Clinton County, he removed to Carroll County, Ill., where he worked by the month as a farm hand for about five years. He then embarked in farming for himself and continued in Carroll County for five years more, after which he went to Whiteside County, Ill. Two years later, in 1868, he came to Grundy County, and purchasing land, began the development of a farm.

In the spring of 1876 was celebrated the marriage of Mr. Diehl and Miss Hattie Macy, daughter of Elias Macy, one of the early settlers of this community. He went to Franklin County, Ind., from New York, where he lived eighteen years before he came to this state, and located in Iowa County, whence he removed to Melrose Township in 1854. Few indeed were the settlers here at that time, for the county was just then being opened up to civilization. Mr. Macy entered a half-section of land from the Government and to the development of his land devoted his energies. His death here occurred in 1885. Grandmother Macy, Mrs. Diehls mother, makes her home with our subject. She is now eighty-one years of age, and was known in her girlhood as Miss Eliza A. Betson. She is a native of New York State. In the family were seven children, five of whom are still living. Mrs. Diehl was born in Indiana. Our subject and his wife have become the parents of the following children: Harry M., George, Frank H., Charlie E., Lida A. and Mina M. Mrs. Diehl, the mother of our subject, died at her home in Whiteside County, Ill., December 19, 1893, aged eighty-five years. She had been a member of the Lutheran Church since early womanhood.

In his political affiliations, Mr. Diehl is a Republican, and though he has never sought or desired political preferment for himself, he feels a warm interest in the success of his party. Through good business ability, enterprise, perseverance and well directed efforts, he has become a prosperous citizen and may truly be called a self-made man. The Diehl household is the abode of hospitality, and its members rank high in social circles. 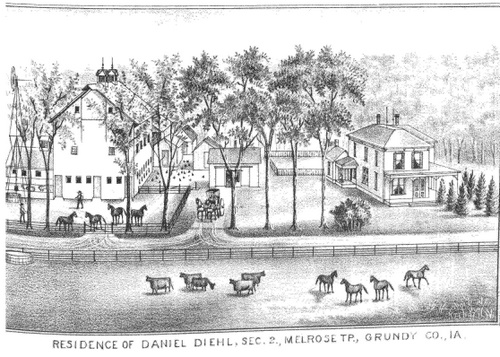