WILLIAM C. MEYER. The following sketch is of one of the best known men of Beaver Township, Grundy County, who has lived here many years and is identified with the various interests of the neighborhood. The family record is an interesting one, and we give it in full. William Meyer was born in Germany, August 8, 1843, and is the son of Fred and Minnie (Kueger) Meyer, also natives of the Fatherland, where the father followed the occupation of a farmer. Of the parental family of seven children three are deceased. Those living are William C., John, Carrie and Minnie.

The elder Mr. Meyer, who was given a good education in his native land, emigrated to the United States with his family in 1857, and first located in Milwaukee, Wis. He worked out by the month for four years in the Cream City, and then going to White Water, Wis., there lived for a like period. Coming to Black Hawk County, this state, in 1864, he rented a farm, which he continued to operate for three years. At the expiration of that time he made his advent into Beaver Township, Grundy County, where he became the proprietor of eighty acres located near what is now the present home of our subject. He finally sold his farm and moved to Cedar Falls, where he was residing at the time of his decease, February 10, 1889. His good wife died in that city April 2, 1889, when sixty-nine years of age. They were members of the Evangelical Church.

The boyhood of our subject was passed on a farm in his native country, where he had the advantage of attending the model schools near his home. He was a lad of fourteen years when he accompanied his parents on their removal to this country, and afterward assisted his father in improving his various farms. July 15, 1871, he married Miss Mary Soltow, who was also a native of Germany. They have been blessed with a family of three children, Nellie, Fred and Minnie. Mrs. Meyer, like her husband, was fourteen years of age at the time her parents emigrated to America, and after coming hither she attended one term of school in Butler County, Iowa.

When compelled to battle with life on his own account, our subject worked out as a farm hand, receiving as remuneration for his labors $2 per month. He was very industrious and economical, and when twenty-five years of age purchased eighty acres of land, which forms a part of his present homestead, and for which he went in debt. He used great care and judgment in the cultivation of the soil, and later added to that tract, until he now owns two hundred and forty acres, which he has placed under good improvement.

Mr. Meyer is a man of pleasing manuers, and his affable disposition has made him many friends in the township which he has called his home for so many years of his useful and busy life. Politically he is a strong Republican, and has been called upon to fill many of the township offices. He is a faithful and active member of the Methodist Episcopal Church. 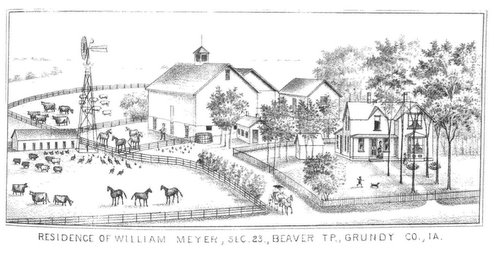