HUGH ELLIOTT. For many years, or since his location in Grundy County, Iowa, the reputation Mr. Elliott has enjoyed has been not only that of a substantial and progressive farmer and stock-raiser, but that of an intelligent and thoroughly posted man in all public affairs. This part of Iowa has proved a mine of wealth to thousands of industrious and earnest farms, who have come hither from other states and foreign countries, and by dint of hard work and enterprise have developed the resources which nature so liberally provided. At least so it has to Mr. Elliott, who resides on section 35, Lincoln Township, and who is one of the prominent farmers of that part of the country.

Our subject was born in the province of Quebec, Canada, in 1840, and is the son of Arthur and Eleanor (Bothwell) Elliott (see sketch of Arthur Elliott). He was reared on his father's farm in Canada and secured an ordinary education in the district school of the neighborhood. From the time he reached that period of life when his physical strength was sufficient to enable him to wield the implements of husbandry and guide the plow, he began to assist on the farm. In his sketch is strikingly illustrated the force of well directed energy, steadfast purpose and never ceasing effort for the accomplishment of noble ends, and the successful overthrow of those obstacles which beset the progress of every man who, unaided and alone, starts out to battle with life's stern realities.

When twenty-two years of age, young Elliott came to the United States and located in Ogle County, Ill., where he began working as a farm hand. He farmed on rented land for two years, and then came to Iowa, where after renting for a few years he bought one hundred and twenty acres. As the years passed along, he added to the original tract until he is now the owner of two hundred acres of excellent land, and his buildings are all in first-class condition. He thoroughly understands every detail of farm life, and nothing about his place is allowed to go to waste.

After residing for some time in the United States, our subject returned to Canada to marry Miss Anna M. Hair, daughter of Bartholomew Hair, who had been a resident of that country for some time. To this marriage were born four interesting children: Frank, Hugh B., Edward A. and Lesley. Mr. Elliott is a Republican in politics. He has ever been public-spirited and progressive, and no worthy movement is allowed to fail through negligence on his part. Mrs. Elliott is a lady of more than ordinary mind and is a worthy member of the Episcopal Church. 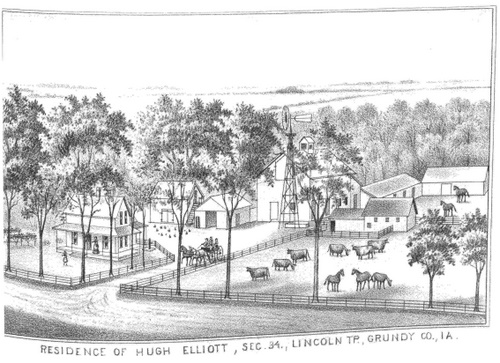