I am not a descendant of the Ridenour family - Im no relation, just a collector of old photographs and came across this one that I felt would be nice to find the family and give it to them; passing forward a favor that was done for me when I received a photograph of my grandfather as a young child; 50 years after she had collected it!

We found a circa 1890s/early 1900 photo that may have connection to the Ridenour/Harris line. On the back of the photo it says Eli Ridenour, East Elkport, Iowa. R.F. D #1, Box 47. (See photo scans below) It is of a sweet little girl dressed in that early eras clothing sitting on an ornate bench, she has a wonderful smile

Posting this photo to the Clayton County, IA web site might help us find the right family. We would love to see this little sweetheart connected to her family. If so, we will send them the actual cabinet card photo. It should be with her family.

(email me at the above email address)

The photographer was probably Edwin W. Chase. He was a photographer in Guttenberg from approx. 1893 until his death in 1923.

Exactly when the Eli & Delila (Harris) Ridenour family removed to California may be uncertain. Mrs. Ridenours obituary says shed lived in CA for 40 years, which would make the move c1892.... but census records indicate the move was several years earlier, the birthplace of their children all being shown as California  the eldest daughter Rheda being born in 1885. The place of birth of their children remains consistent in the census throughout the years. So either the photographer was doing business earlier than 1893 or the photo was taken during a visit the family made to their old home in Iowa.

The little girl in the photo looks to be 2-3 yrs old, so if she is one of Elis daughters, she hopefully can be narrowed down by someone knowing more about the family.

Thank-you for your efforts to reunite the photo with a descendant.

There was a second Eli Ridenour, a nephew of the Eli Ridenour above, who was born in Garber, Iowa (aka East Elkport) in 1881. As far as I know, this second Eli was an only child, got married in 1912, and had 2 sons. He lived out his entire life in the Elkport-Garber area (he died in 1937) and he is more likely the Eli Ridenour listed on the back of the photo.

Unfortunately, I cant identify the girl in the photo. One idea is that it might be a childhood photo of Mamie Hansel (born 1889) who married the second Eli Ridenour in 1912. Another possibility is that she is one of Elis numerous female cousins. 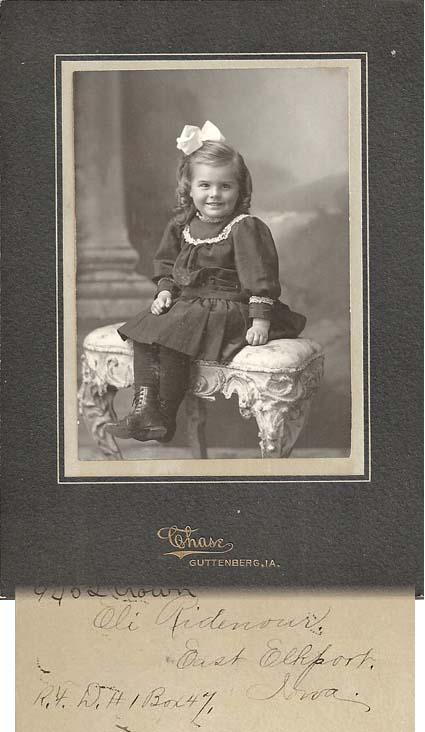