Julie was united in marriage to Walter Ray Goins and three children were born to this union. Walter later passed away. Julie was then married to Douglas S. Baade on January 6, 1978, at the United Methodist Church, Monona, Iowa. Over the years, Julie worked as an Audit Tech, Bookkeeper and Cashier. She was active in Cub Scouts, Girl Scouts, American Legion, AmVets, Democratic Party, Monona Zoning Committee, Booster Card Club and Living Faith United Methodist Parish.

Visitation will be held on Tues., Oct. 4, 2011 from 4-8 p.m. at the LeonardGrau Funeral Home and Cremation Service of Monona, Iowa, and one hour before services at the church on Wednesday.

Burial will follow in the Monona Cemetery, Monona, Iowa, with military honor.

LeonardGrau Funeral Home and Cremation Service of Monona, Iowa, is in charge of arrangements. 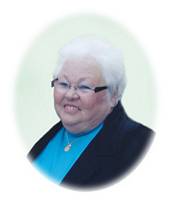