Meder Loraine Peterson, the son of Melvin and the late Isabelle Engelhardt Peterson , was born in Marion township July 10, 1929 and was baptized at the home of his grandparents, Mr. and Mrs. P. N. Peterson that same year. He was confirmed at the Marion Lutheran Church at Gunder.

His home has been on various farms throughout this community, where he also attended country schools, Luana consolidated school and Postville high school.

November 10, 1947 he was united in marriage to Delores Hesse of Postville. This union was blessed with two children: Larry Meder, three years old and Cheryl Ann, two days old.

Prior to his death he farmed near Luana, and also hauled milk for the Carnation Milk Company at Castalia.

He passed away September 22, 1951 at the Iowa City Hospital of Polio after only a few days illness, at the age of 22 years, two months and 12 days.

Those left to mourn his departure are his wife and children; his father and step-mother, Mr. and Mrs. Melvin Peterson of Frankville; two brothers: Ivan of Denver, Colorado, and Donald of St. Olaf; also one step-brother and three step-sisters, one nephew and twin nieces; his grandparents, Mr. and Mrs. Robert Engelhardt of Elkader and Mr. and Mrs. P. N. Peterson of St. Olaf; also many cousins, aunts and uncles, plus a host of relatives, neighbors and friends.

His mother Isabelle preceded him in death March 9, 1934.

Peterson Rites To Be Held This Afternoon

Mr. Peterson was taken to Iowa City last Thursday and was admitted to the polio ward of the hospital in a serious condition. He passed away Saturday afternoon. He is survived by his wife and two children. A baby daughter was born to the family at the hospital here Monday morning.

The photo of Meder from his gravestone in Norway cemetery was added by Reid R. Johnson 6/13/2015. 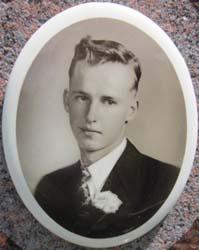