She was united in marriage to Lawrence Miller and one son, Duane, was born to this union. Mabel worked at the McGregor Drug and Gift Store for many years. She enjoyed gardening and cooking and was a long standing member of St. John Lutheran Church in Farmersburg.

Mabel was preceded in death by her parents; her husband; her son, Duane and Alice Miller and one sister, Burnette Hansel.

Extracted from the funeral brochure. 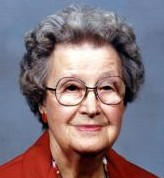