Sir--
An old and constant subscriber to the Irish World since 1872 departed this life on the 14th day of this month. In the person of James Maguire. He had almost attained his 66th year, having been born on Jan. 16, 1833, near the town of Killashandra, County Cavan, Ireland.

In company with his father, mother, brothers and sisters he immigrated from Ireland in the dreadful year of '47, and settled first in Connecticut, where he remained until 1852, when the family went to Clayton County, Ia.

In 1861 he went to California, where he engaged in mining for ten years. In 1872 he returned to Iowa, to be present at the death of an aged and respected father. He afterwards lived on a farm in Iowa until five years ago, when he purchased a fine farm nine miles from Spokane City.

James Maguire was a thorough Irishman, in the true sense of the word, being an exemplary, practical Catholic and an ardent lover of his native country, though not less a true American. He was a stong supporter of the principles of the Irish World. He was universally respected and loved by those who knew him, and a great many friends, especially in Iowa and California. He, like many other of his countrymen, had not the happiness to see the ardent desires of his heart fulfilled, because, next to those duties to his God, which he so well fulfilled, his next desire was to see Ireland a free nation.

He leaves a large and respectable family behind him, a loving wife, seven children and a brother, Patrick, to whom he was tenderly attached, and who in return loved him tenderly. May his soul rest in peace. 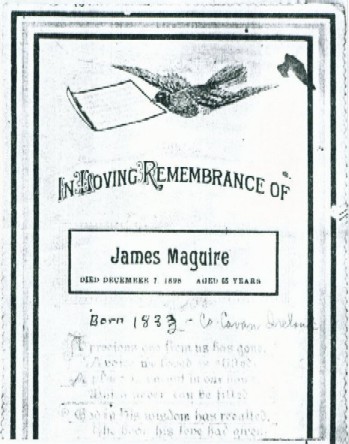