He was born October 4, 1922, on a farm in Clayton County, to Daniel and Hulda (Frederick) Sutter. Fritz attended country schools.

February 16, 1945, he was united in marriage to Arlene B. Hilgerson in West Union. Two children were born to this union. He farmed three years and worked for the lumber yard in West Union. He retired from Fayette County Road Maintenance in 1984. At that time, they moved to Lansing where they lived until ill health forced them to move back to West Union.

Frederick was preceded in death by his parents and a brother, Selmer Sutter, in infancy. 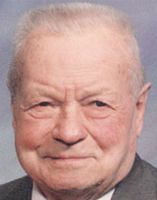