Alan graduated from MFL High School in 1979; Northeast Iowa Technical School, Calmar, in 1981 with a Construction Technology degree; Northeast Iowa Technical School, Calmar, 1986, with an Industrial Electrical degree; and Upper Iowa University in 1990, with a B.S. for education, Secondary Mathematics and his coaching endorsement.

He was united in marriage to Gwen Kaeser, August 15, 1987, at the Rossville Presbyterian Church. They moved to the family farm in June of 1995, where he grew up. Two children were born to this union.

While in high school, he worked with his father on the farm and with Hoth and Son carpentry. He also worked at Swiss Valley Farms in Luana, hired farm help, summer counselor at Camp Klaus, Monona Wire Corporation, Swiss Valley Farms in Gunder, and Dura Automotives in West Union as a mechanical engineer for ten years. Currently, he taught at MFL-MarMac Community Schools and worked security at the Isle of Capri and construction in the summer.

Alan was a member of St. Paul Lutheran Church, Monona, where he also served on the church council, was a Sunday school teacher, Confirmation mentor, enjoyed singing in the church choir, and was involved in Boy Scouts.

Survivors include his wife Gwen of Monona; his children, Andreana Hoth and Trevor Hoth, both of Monona; a brother, Randy (Kathy) Hoth of Shorewood, Wis.; a sister, Gayle (Linn) Heithoff of Harvard, Ill.; and another brother, David Hoth of Denver, Colo.; and several nieces and nephews. 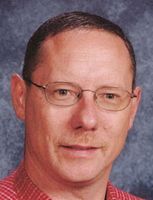