Mrs. John Korrect requests the honor of your presence at the marriage of her daughter Wilhelmina Johanna to Fred C. Boland, September 13, 1913 at St. Mary's Church, Armstrong, Iowa.

At 9:00 o'clock last Tuesday morning, at the Catholic church, occurred the marriage of Fred C. Boland and Miss Minnie Korrect, both prominent young people of our city. A large party had been favored with invitations and despite the inclement weather, they nearly all responded. The Catholic wedding service is beautiful, and was carried out to the letter in this instance. The church decorations were modest but becoming. At the appointed hour the bridal party entered the church, and forthwith the service began.

Miss Rose Korrect, a sister of the bride, was bride's maid, and Leo Boland, a cousin of the groom, was the best man. Master George Korrect, a nephew of the bride, acted as ring bearer, and Little Miss Minnie Skully, a niece of the bride, was flower girl. The entire party was elaborately gowned. The bride was attired in Pearl White Messaline with Dutchess overlace, and her maid, Miss Rose, wore pink Messaline with Oriental overlace. The men folks were dressed in black.

Immediately following the service at the church, a reception was tendered the newlyweds at the home of the bride's mother, Mrs. John Korrect. Here the decorations were more gorgeous - pink and white the bride's colors, predominating, with an occasional spot of green. An elaborate wedding feast had been prepared, and upwards of seventy-five sat down to a spread which viewed from point of variety and palateable preparation, has never been excelled in the city. For an hour or two following the noonday meal, the time was given over to an impromptu musical program in which T.W. Doughty and Miss Mame Skully of Bancroft, were the principal performers. After all had been served at dinner, the larder appeared to be untouched, so plentiful were the good things at the beginning, and that well known Korrect hospitality insisted that all remain for supper, and the invitation was generally accepted, and just at dusk everybody surrounded another over-laden banquet board. After this meal another musical program was had. This effort was more general, and everybody that was not too stuffed with viands, joined in.

In speaking of Mr. and Mrs. Fred C. Boland, we scarcely know where to begin. There are so many good things that we could conscientiously say about them, that to find a starting point, is difficult. The groom has been a resident of Armstrong for about one year. During that time he has been associated with his brother, J.J. Boland and Geo. Korrect in conducting a billiard parlor. He is a young man that deports himself correctly at all times and has a host of friends. Everybody admires Fred Boland because he is a real man. He has selected as a life partner, one of the fairest flowers that ever grew - a young woman who is loved and admired by all. She is a young lady of culture, a talented musician, and will make a true, loving wife. Both these young people have been active workers in the Catholic church, the bride having served the [illegible] congregation as organist for ten [illegible] past.

We could go on indefinitely telling of their good qualities, but there must come an end. In concluding, the Journal hopes that their whole life will be as full of love and fond hopes as was their wedding day.

~original invitation, photo of the couple & newspaper clipping collage
~notes:
Armstrong is in Emmet county, Iowa
Fred C. Boland was the son of John L. Boland & Jane Orr of Clayton county. He was born and raised on the family farm near Elkader. Follow the link below to the Boland family album on the Clayton co. IAGenWeb site for more photos & family info. 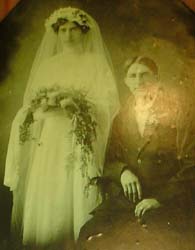