During the course of an active, busy and useful life John Wesley Brown miller was connected with general agricultural pursuits in Cherokee county and filled several local offices, the duties of which he discharged with promptness and fidelity. His personal worth caused his death to be deeply regretted when, on the 22d of November, 1900, he passed away. He was born in Cincinnati, Ohio, June 16, 1847, and was a son of Jeremiah and Catherine (Pentzer) Brown miller, both of whom were natives of Pennsylvania. The father was a blacksmith by trade and in 1855 removed westward, settling near Arcadia, Clayton county, Iowa, where he followed his trade until his removal to Fayette county, this state, where his last days were passed. His wife survived him and died in Cherokee. In their family were nine children: John W.; Mary, the widow of Thomas Stewart and a resident of Yankton, South Dakota; Charles, living in Cherokee county; Susan and Franklin P., who have passed away; Emma, the widow of John Kelly, of Orfordville, Wisconsin; and James, George and Edward, all of whom are deceased.

John W. Brownmiller was a little lad of about eight years when the family came to Iowa and in the schools of Clayton county he pursued his education. Later he took up the occupation of farming there and subsequently followed farming in Fayette county but ultimately returned to Clayton county, where he lived until his removal to Cherokee county on the 5th of October, 1881. He then settled in Rock township, where he became owner of a tract of land, which he carefully cultivated and improved, adding to it many of the equipments of a model farm of the twentieth century. Everything about his place indicated his careful supervision and practical methods and his work brought to him a sub-:stantial return. Following his demise his widow conducted the farm until 1906, when she removed to Cherokee, where she now lives.

It was on the 15th of October, 1879, that Mr. Brownmiller was united in marriage to Miss Mary Margaret Pixler, a daughter of James M. and Eliza (Fry) Pixler, of Clayton county, Iowa, the former of whom was born in Fay ette county, Pennsylvania, January 25, 1822. He came to Iowa in 1850, reaching McGregor on the 23d of April. From there he moved to Farmersburg, where he remained for three years, when he came to Grand Meadow township, Cherokee county, settling on section 23 on a farm of one hundred and sixty acres, which he had previously purchased. He now owns two hundred acres of land which he has brought to a high state of cultivation. March 26, 1846, he was married to Eliza Fry, who was a native of Huntingdon county, Pennsylvania, and whose natal day was March 11, 1824. Mr. and Mrs. Pixler became the parents of the following children: Sarah A., now Mrs. Richard Larkin; Melissa M.; Mary M., now Mrs. Brownmiller; Elizabeth E.; Clara, now Mrs. Charles Horrocks; George W.; and Emma L. Mr. Pixler gives his political support to the republican party and he has held various local offices of trust, among them those of township assessor and trustee. He is a consistent member of the Baptist church. Unto Mr. and Mrs. Brownmiller were born three children. Clara is the wife of Nicholas Smith, of Douglas, North Dakota, and their children are, Chester, Cecil, Floyd, Ethel and Fern. James Arthur is a resident of Rock township and is married and has three children, Sherill, Syral and Erma. Ray Edward, the youngest of the family, also lives in Rock township. He is married and has four children, Elmo, Vernon, Orville and Pearl.

In his political views Mr. Brownmiller was an earnest democrat and, while he was never a politician in the sense of office seeking, he served as township trustee and as constable. He was also school director and the cause of education found in him a warm friend. Fraternally he was connected with the Independent Order of Odd Fellows and his wife holds membership in the Methodist Episcopal church. Many sterling traits of character gained for him the warm regard and goodwill of those with whom he was associated and those whom he met in social relations learned to feel for him the strongest friendship. 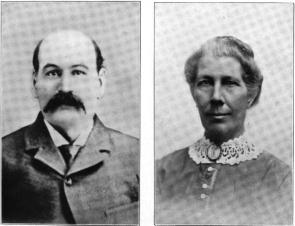