You get used to it after a while but it never ends, he said. And he says forthrightly, Anyone whos been in the Navy and says they never got seasick is telling an alternative truth.

Hopp was assigned to a Navy destroyer as a radar specialist, part of a combat information center.

We were in a task group of 12 to 14 destroyers, a couple of cruisers and one or two aircraft carriers. We received and transmitted information, mostly assignments or orders coming in from others in the task group, said Hopp.

Life in the Navy was quite an adjustment for the 19-year-old kid who grew up in the western Iowa town of Moville.

Moville  thats next to Larryville and Curleyville, Hopp said with a laugh.

It was an unwritten rule for Hopp adult men that, when called on to serve, you went in the Navy, he said.

When he got out of the service he went to Iowa State Teachers College (now the University of Northern Iowa), where he met his wife of 58 years, Joyce, and then did his student teaching at Monroe School in Mason City.

From 1959 until his retirement in 1992, he taught at Roosevelt Middle School with occasional stints at John Adams.

Hopp has devoted much of his life in retirement to making sure the public pays proper tribute to men and women who have served their country.

They owe a debt of gratitude and a duty to remember, he says unhesitatingly.

Over the years, Hopp has written close to 200 letters to the editor, many of them with his opinions on war and reminders to readers as to what war is all about.

Thankfully, casualties are down, he said at the time. I took no pleasure in doing it.

For 10 years, he and his wife volunteered their time making weekly trips back and forth to Des Moines, taking North Iowans to the Veterans Administration Center.

Through the years, one harrowing experience in Korea has stayed with him.

One of his destroyers roles was to recover any pilot who didnt make a successful launch or landing on a carrier deck. It was a routine assignment most of the time, he said.

One night a fighter plane, probably hit by enemy fire, went down and Hopps ship got word the pilot was in the water needing to be rescued. As his ship lowered a whaleboat with a rescue crew, a helicopter hovered over the fallen pilot and a lowered a cable for him to grab and attach to himself. The helicopter began to rise with the pilot grasping the cable as he was being hoisted to safety.

Suddenly, said Hopp, for some reason, the pilot fell and the sea swallowed him. We watched in dismay as our whaleboat crew tried to locate him but had no success.

That was over 60 years ago, he said and now when I am on my solitary early morning walks and my thoughts wander without focus or restraint, I sometimes think of that young pilot. And I live with the paradox of not knowing anything about him, or even his name, yet never forgetting him. 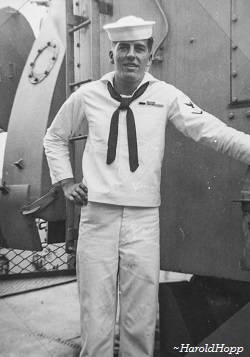