She was employed by the University of Northern Iowa as Secretary to the Director of Mauker Union.

Services: Tuesday at First Presbyterian Church with inurnment at a later date in Greenwood Cemetery, both in Cedar Falls. Visitation, Monday at Richardson Funeral Service, Cedar Falls, and also for one hour prior to the service Tuesday at the church.

Memorials may be directed to PEO Chapter KL Scholarship Fund.

Condolences may be left at www.richardsonfuneralservice.com.

Elnora was fortunate to be able to participate in the lives of her grandchildren and great grandchildren. She enjoyed the friendships developed through her employment at UNI, bridge groups, volunteer endeavors and PEO. 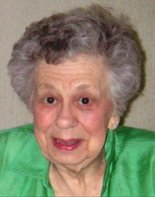