She was born May 28, 1934, in Waterloo, the daughter of Milo and Irene (Morgenson) Vich. She graduated from Waterloo West High School in 1951. She attended Iowa State University where she was proud to be a Kappa Kappa Gamma. She married her sweetheart, Dick Berray, on July 23, 1955, in Waterloo. They worked and lived in various places, including Iowa, Illinois and Indiana. They started traveling to Blackduck in the mid-'60s with their family on vacation and retired in Blackduck in 1990. She did a lot of volunteer work and church work, including Sunday school teaching. She was active in politics in the 1960s and '70s. She was a member of the Blackduck Tri Sigma and P.E.O. She was most proud of raising four wonderful children and the grandchildren and great-grandchildren that followed. She always had a smile on her face. 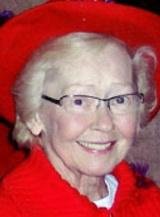