He was born May 30, 1912, in Petersburg, son of Bernard and Bernardina Deppe Goedken. He married Evelyn Nagle Deeds on August 27, 1983, in Waterloo.

Friends may call from 4 to 8:00 p.m. Wednesday at Hagarty-Waychoff-Grarup Funeral Service on South Street, Waterloo, where there will be a 5 p.m. rosary and a 7 p.m. vigil service. Visitation also for an hour before services Thursday at the church.

Memorials may be directed to the church. 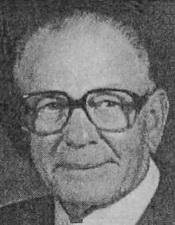