He was a real estate broker/appraiser with Smith & Miller Real Estate, Fox Realty and Peoples Federal Savings & Loan Association for 32 years, retiring in 1988. He was a veteran of World War II, serving in the U.S. Navy.

Preceded in death by: a son-in-law, George Moorhous; two brothers, Russell and Loyde (June); and a sister-in-law, Lucille Fox

Services: 10 a.m. Tuesday at Queen of Peace Catholic Church, with burial in Mount Olivet Cemetery, where full military rites will be conducted by American Legion Post 138, Veteran of Foreign Wars Post 1623 and the Iowa Army National Guard. Public visitation from 4 to 8 p.m. Monday at Hagarty-Waychoff-Grarup Funeral Service on South Street, where there will be a 4 p.m. legion of Mary Rosary and a 7 p.m. vigil service. Visitation will continue for an hour before services Tuesday at the church. 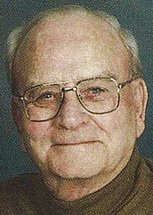