Ruth N. Haas, 86, of Waukon died Wednesday, September 11, 2013 at Good Samaritan Center in Waukon. A Mass of Christian Burial was held Monday, September 16 at St. Patrick Catholic Church in Waukon, with Fr. Jim Dubert officiating. Burial was at Mt. Olivet Cemetery, Waukon. Martin Funeral Home assisted the family. Memorials may be made in memory of Ruth to St. Patrick School or Good Samaritan Center, both in Waukon.
Ruth Norma Haas was born May 28, 1927 in Decorah, the daughter of Henry and Nora (Carlsborg) Hanson. She was baptized and confirmed at Glenwood Lutheran Church in rural Decorah. Ruth attended Rocksvold Country School through eighth grade and graduated from Waukon High School in 1945 as Valedictorian. She also attended Waukon Junior College for one year.
Ruth worked in the superintendents office at Waukon High School. April 18, 1949, she married Vince Haas at St. Patrick Catholic Church in Waukon. Ruth worked for several years at The Red Owl as a bookkeeper and later stocked the card rack at Quillin's Food Ranch, both in Waukon.
Ruth was a member of St. Patrick Catholic Church, where she served on the parish council, and was active as a unit leader and was a charter member of Kateri Tekawitha Study Club. She enjoyed genealogy, sewing, quilting, baking, playing cards, keeping photo albums of every trip, and memory books for each of her children's families.
She loved family gatherings and every opportunity she had to spend with her children and their families. Christmas was a special time for Ruth, she made several batches of KrumKake and meatballs according to her Norwegian heritage. She and Vince went on several bus trips, traveling to 44 states, and also traveled to Norway, Ireland and Italy.
Survivors include her husband, Vince of Waukon; her children, Ted (Dianne) Haas of Ottumwa, Mary (Mike) Finnegan of Independence, Carol (Gayle) Decker of Waukon, Tom (Annette) Haas of Iowa City, Julie (Mike) Snitker of Waukon, and Christine (John) Murphy of Osceola, IN; 21 grandchildren; and 13 great-grandchildren. She was preceded in death by her parents; a grandson, Brian Haas; two brothers, Oscar and Julian "Jack" Hanson; and a sister, Hazel Hanson.
Casketbearers were Heather McClellan, Matt Haas, Christopher Ryan, Michelle Julius, Kyle Decker and Donald Hanson. 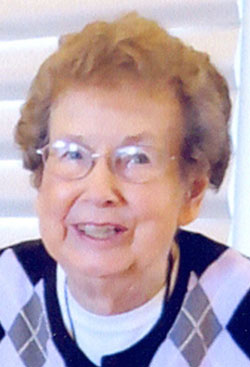