Alta Hager, 95, of Waukon died Tuesday, May 21, 2013 at Good Samaritan Center in Waukon. Funeral services were held Tuesday, May 28 at Zalmona Presbyterian Church in rural Waukon, with Pastor Tom Buresh officiating. Burial was in the church cemetery. Martin Funeral Home assisted the family with arrangements.

She was baptized and confirmed at West Paint Creek Synod Lutheran Church in rural Waukon and attended Fan rural school in rural Waterville and graduated from Waterville High School in 1936. Alta did some cleaning and trained as a nurses aide and worked at the Bakkum Clinic in Waukon.

October 14, 1943, she married Nathan Paul Hager at West Paint Creek Synod Lutheran Church. Alta and Nathan farmed together in Ludlow Township where she helped with the field work and milked cows. They moved into Waukon in 1980.

She was a member of Zalmona Presbyterian Church where she taught Sunday school, sang in the choir and was involved in the womens organizations. Alta was also a member of the Homemakers Club, New Century Study Club and Allamakee County Farm Bureau. She enjoyed working in her vegetable and flower gardens, playing cards, refinishing furniture, taking bus tours with family and friends, reading, listening to books on tape and following her kids activities. 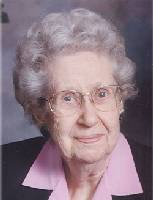