Many in Lansing, the surrounding countryside and neighboring towns felt a personal loss in the death of "Dr. John," as he was affectionately known in this area where he and his father before him provided almost a century of medical services since the elder Dr. Thornton opened his practice here in 1880.

Dr. Thornton was born in Lansing on October 12, 1891 to Dr. John H. Thornton and his wife, the former Mary Kelleher. He graduated at the age of 15 from Lansing High School, where he was valedictorian of the class of 1907.

After receiving both a B.A. and an M.A. degree from Loyola University, Chicago, he was graduated in 1915 from Rush Medical College -University of Chicago. He placed first in competitive examination for a much-sought internship at Cook County Hospital, Chicago, and after interning there, he spent several months in research at that large hospital.

In 1917 he was offered a Fellowship at Mayo Clinic, Rochester, but instead he returned to Lansing to assist his father, who was in failing health. These were years when house calls in the country were often made by horse and buggy, and sometimes across the Mississippi in winter by sleigh on the ice, well before the bridge was built.

In 1920 he married Blanche ODonnell, whom he had met as a nurse at Cook County Hospital, and over the next several years four sons and three daughters were born to them.

In 1929 he joined his cousin, Dr. Thomas F. Thornton, a prominent surgeon in Waterloo, in a surgical-medical partnership in that city. Waterloo was particularly hard hit by the Depression, and in 1931 he returned to Lansing where he continued his practice until failing eyesight caused him to retire in 1974.

Dr. Thornton was a member of Alpha Omega Alpha, the national honorary medical fraternity. He joined the staff of St. Francis Hospital in La Crosse in 1931, and continued as an honorary member until his death. He was also one of the initial members of the staff of the Veterans Memorial Hospital, Waukon, and was appointed to the staff of the Decorah hospital.

He was a company surgeon for the Milwaukee Railroad for 50 years. He was an active member of the American and the Iowa Medical Societies, and he contributed a number of professional articles to medical journals, primarily dealing with diagnosis and treatment of heart disorders.

He was one of the early members of the American Academy of Family Practice, in which he continued until his death.

He was widely respected by his fellow physicians and by all who knew him, but especially by the thousands of patients he cared for over the years, in many cases including four generations of the same family. As long ago as 1962, on the 45th anniversary of his medical practice, Lansing united in a tribute called "Dr. Johns Day," culminating in a program of appreciation attended by a large crowd in the auditorium in the former City Hall.

In 1976 he was honored again in a permanent way by the citizens of Lansing when they named the new nursing home Thornton Manor. Dr. Thornton was what is sometimes called "a legend in his own time." Respected by all, revered and loved by thousands, he will be long remembered.

He is survived by his wife; by three daughters, Dr. Mary T. Roland of Ogden, Utah; Miss Patricia and Miss Margaret, both of Madison, Wis.; and by three sons, John, of Pittsburgh, Pa.; Gregory of Chicago; and Matthew of San Francisco.

He is also survived by a sister, Mrs. Merrill J. (Rita) Curtis, of Omaha, Nebraska; and by eight grandchildren and two great grandchildren. A son, Thomas, was killed in an auto accident in 1951. Also preceding him in death were a brother, Norbert, of Seattle, Wash. and two sisters, Mrs. Martin J. (Julia) Farnan of Dubuque and Mrs. Edward (Genevieve) Julson of Euless, Texas, whose recent death was reported and whose funeral was held only four weeks ago.

The Burke-Thornburg Funeral Home was in charge of arrangements. 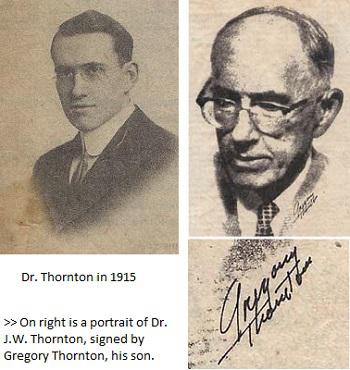