It is with a sorrow in which the entire community shares that we are called upon to announce the passing of the last surviving veteran of the Civil War, D.E. Harrington, who passed away at the home of his daughter, Mrs. Alida Lange, of this city at 11 o'clock last Thursday forenoon, his demise following several weeks of failing health, his passing being due to no specific disease other than the frailties incident to age. Mr. Harrington was a man who enjoyed a wide acquaintance throughout northeastern Iowa due to his activities in band and orchestra work over the wide area and his general disposition won for him the friendship of all who are within the circle of his acquaintance. He had been a resident of this city for many years and he was admired and honored by us all and his life's close marks the passing of the last surviving Civil War veteran in Allamakee county.

In his early boyhood he moved with his parents to Iowa and located at National. Later they moved on a farm near Farmersburg. He received his early Christian training in the Methodist church of which his parents were devout members.

At the age of eighteen years he enlisted in the Civil War in 1861, and served through two enlistments; during the first enlistment as a private in Company C, 13th Regiment, U.S. Infantry, and in the second enlistment as a member of General Sherman's band in which he served until the close of the war in 1865. It was with this military band that he began his musical career.

On December 8, 1867, he was united in marriage to Nancy Ann Burnham of Farmersburg, and they settled on a farm in Grand Meadow township, To this union six children were born, all of whom are living.

In 1887 he moved to Postville and has been a resident here continuously since that time. He possessed a great musical talent, and for years conducted various bands and orchestras throughout northeastern Iowa and also conducted the Soldiers' Home Band at Marshalltown for some time. As a token of esteem and in recognition of his musical ability, he was asked to direct the Postville High School band in a concert at the city park on the occasion of his ninety-first birthday, and his many friends were delighted to see what his musical skill and enthusiasm were still retained in his old age.

His wife preceded him in death on January 3, 1916, and since then "Dad" - the name by which he is affectionately known - has made his home at the Soldiers' Home in Marshalltown and with his children at Postville.

He has been a member of the Masonic fraternity for a period of sixty-eight years, having been initiated as a member of National Lodge No. 172, A.F.&A.M. on May 25, 1867. That Lodge was later removed to Farmersburg in 1889 but he retained his membership in that lodge until death. A record of membership in one lodge that has few if any equals in the history of Iowa masonry.

"Dad" was an honest and upright citizen in every respect and will greatly missed in the community for though old in years he was youthful in his spirit, and had an unfailing interest in all the concerns of the town. He was always present at the various functions of the community until he was confined to his home through failing health in the later spring.

He leaves to mourn his loss six children - Adelaid Thoma, Alida Lange, Art, Fred, and Cy, all of Postville, and Gussie of Marshalltown - 13 grandchildren, 13 great-grandchildren, and one great-great-grandchild, who have the tenderest sympathy of all in their time of bereavement.

The funeral was held from the Postville Community Presbyterian church on Sunday afternoon, July 14, at two-thirty, conducted by Rev. R.F. Galloway, the Masonic fraternity and the American Legion, G.W. Hunt conducting the Masonic service for National Lodge. Interment was made in Postville cemetery. 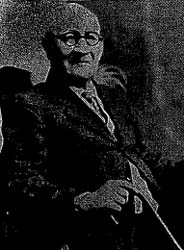