Funeral services for Mrs. Harvey Clark, 94, were held Wednesday afternoon, July 1, at 2 p.m. at the Schutte Funeral home in Postville with Rev. E. Wayne Hilmer of the Monona Methodist Church, officiating. Burial was in the Postville Cemetery.

Born of pioneer parents, Mr. and Mrs. Charles Jones of Makee township, Martha Ann Jones' birth was January 25, 1859. On May 31, 1881 she and Harvey Clark were married.

They were the parents of two children, Virgil L., a prominent attorney of Portland, Oregon who passed away November 4, 1918, and Libbie, now Mrs. Don E. Lamborn of near Luana.

Mr. and Mrs. Clark lived near the old Stone House on Highway 51 on a farm that was purchased in 1888. After Mr. Clarks death on November 5, 1945, Mrs. Clark continued to live there until two years ago when she went to live at the Hanson nursing home in Waukon. It was here that her death occurred June 27, 1953. Her entire life was spent in Allamakee county except for a few years in Wisconsin and Oregon.

She is survived by her daughter; five grandchildren and six great grandchildren; two brothers, Lewis E. Jones of Waukon, and Arthur A. Jones of Postville; two sisters, Mrs. Mabel C. DeWitt of Waukon and Mrs. Della V. Russell of Harpers Ferry; and a host of other relatives.

She was preceded by her husband and a son, her parents, four brothers and four sisters. 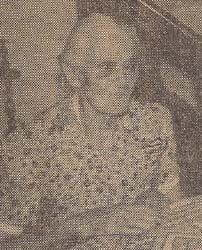