Josephine was born January 24, 1901 in New Albin, Iowa, the daughter of Nicholas and Louisa (Teff) Colsch. Throughout her younger years, she attended New Albin Schools. In 1917, she married Paul Goeke. Following Paul's death, Josephine married Francis John Gerkey on October 27, 1925 at the St. Patrick's Catholic Church in Waukon, Iowa. Josephine was a baker for the S&D Cafe, Model Cafe, and Reva's Cafe. She also worked as a seamstress. Josie was a lifetime Allamakee County resident and spent most of that time in Waukon, Iowa. She was a member of the St. Patrick's Catholic Church, Rosary Society, and was an active volunteer at the parish. 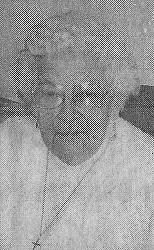