Charles A. Harris was born in Post township, Allamakee county, Iowa, 36 years ago last May, and has always resided on the homestead which gave him birth. He was a member of one of the oldest, wealthiest and most respected families of this section, and in all his dealings none ever found him otherswise than honorable, upright and square. He was by nature of a jovial disposition, and his genial ways drew about him a host of friends who will learn with sorrow of his life's sad ending. He leaves to mourn his loss a faithful little wife and five small children, several brothers and sisters, and numerous relatives and friends. His family is left in good circumstances, he having several thousand dollars of life insurance beside considerable personal means. The funeral was held from the United Brethern church in Bethel and was conducted by Rev. Ross of Castalia and the attendance was unusually large. Interment in Minert cemetery.

Contributor's note:
Charles Andrew Harris was born May 14, 1866 and died by suicide October 31, 1902. He was married to Alida Harrington on May 30, 1893 in Postville. He was my gg-uncle, and brother to my gg-grandfather George W. Harris. The obit is from a newspaper clipping, likely the Postville Review. The photo is from my personal collection of family pictures.

Suicide near Postville
Chas. A. Harris, a well known farmer of Post township, Allamakee county, committed suicide on the 1st inst. When his absence was noticed a vigilant search was made of the premises without finding a trace. Neighbors then joined in a wider investigation. Frost foot-prints led into a timber and hanging to a tree was discovered the lifeless form. Mr. Harris was only 36 years of age, a man of family, leaving a wife and five small children It Is thought that a financial difficulty had created a mental unbalance that led him to the strange act. He himself had at times feared that he would in his moody spells do injury to his family. 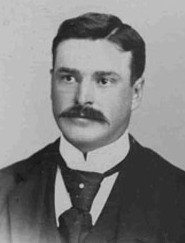