Gladys was born in Lansing Township of Allamakee County April 9, 1912 to Moritz and Ella (Henry) Gruber. She attended rural schools and then graduated from Lansing High School in 1930 with a Normal Training Course. Gladys taught six years in rural schools in Allamakee County before her marriage to Lawrence Bakewell June 10, 1936 at St. Raphael's Cathedral in Dubuque. They farmed in Iowa Township. He preceded her in death November 3, 1966 as the result of a farm accident.

In 1972 Gladys moved from the farm to New Albin. She was a member of the Rosary Society, Foresters, and active in Senior Citizens Club, as well as being a Mealsite volunteer and member of several card clubs. She enjoyed gardening and had many beautiful flowers.

The Thornburg Hanson Funeral Home in Lansing was in charge of arrangements. 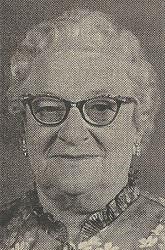