She was born May 16, 1894 in New Albin. She is survived by a daughter, Geneva Allwood of Canon City, CO; 17 grandchildren; and a sister, Alice Kelly.

Burke-Thornburg Funeral Home, Lansing, was in charge of arrangements. 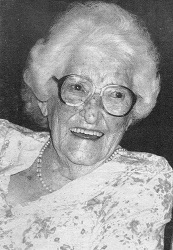