In a study of the lives and character of the men who have been chosen to administer the laws of Iowa, it is pleasant to note the recognition of the younger men at the bar. It is gratifying to find instances where such recognition is based on solid merit combined with modest demeanor, as in the case of Hon. A.N. Hobson, of West Union. Judge Hobson is a native of the state of Pennsylvania born in Allegheny City. His father, Hon. Joseph Hobson, moved to Iowa with his family in 1855, settling at Fayette, where he entered upon the practice of law. In 1858 he was elected county clerk and moved his family to West Union. After five continuous terms as clerk, he was elected to a seat in the house of the Thirteenth General Assembly, serving with ability during his term. At the close of it he was appointed assessor of internal revenue, in which position he served until the office was abolished. Mr. Hobson was a man of great force of character and enjoyed the respect and confidence of all who knew him. His wife was Miss Elizabeth Baker, who was an ideal wife and mother, presiding over the home with dignity and tenderness, giving the best of care and counsel to her children. It was under the influence of such a home that Alfred N. Hobson grew to manhood. In boyhood he attended the public schools of the village, afterwards the Upper Iowa university, and later at the State university. He chose law as his profession, and entered upon the study under the direction of his father and later in the office of Hon. L.L. Ainsworth. He spent three years in Dubuque in the office of the United States assessor of internal revenue, gaining a knowledge of the business and a wide acquaintance among the prominent men of Iowa. In 1875 he became associated with Hon. L.L. Ainsworth in the practice of law, which was continued for twenty years, until Mr. Hobson was called to the bench at the beginning of 1895. During this time he devoted his energies to acquiring a thorough practical knowledge of the profession, and won recognition at the bar of the district as a chancery lawyer, unsurpassed in northern Iowa. In 1894 there was a spontaneous movement in the district to elevate him to the bench, and the republicans tendered him the nomination, which he accepted. He was elected and entered upon the duties of the position, for which he was eminently qualified. As a judge, he has been remarkably successful, not only in earning the esteem of the bar and litigants, but in the care and caution exercised in ruling on points of law, in his methods of expediting business in the court room, and in rendering decisions that have been affirmed in the higher judicial tribunals. His judicial district consists of the counties of Allamakee, Clayton, Winneshiek, Fayette, Howard and Chickasaw. Judge Hobson was re-nominated by acclamation for a second term, and elected practically without opposition.

In 1878 Judge Hobson was married to Miss Mattie Kincaid Ingham, daughter of John B. and Catherine (Neeb) Ingham, of Allegheny City, Pa. They have three children: Joseph I., Ida N., and Florence L. Mrs. Hobson is a lady of intelligence and refinement, and while devoted to her domestic duties, is imbued with the public spirit of the modern woman, and is active in club work, and a favorite in social circles of the community in which they are loved and esteemed.

- source: Biographies and Portraits of the Progressive Men of Iowa, 1899.
- transcribed by Roseanna Zehner 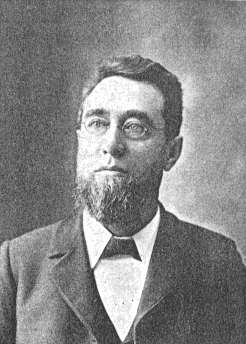