James I. Gilbert
From colonel to brevet major-general summarizes the war record of James I. Gilbert. A Kentuckian, born in 1824, in 1852 he made his home in Lansing, Iowa. On August 10, 1862, at the age of thirty-eight, he was appointed colonel of the Twenty-seventh Iowa. A commission merchant, liveryman and real estate dealer before the war, he evinced such aptitude for military service and such courage at Pleasant Hill, where he was wounded, at the capture of Fort de Russey, in the ill-fated Red River campaign, and later in the battle of Nashville, that on February 9, 1865, he was accorded promotion to brigade command and in the following month we find him a brevet major-general.

General Gilbert was a born soldier, over six feet in height, broad chested and erect, swarthy complexioned, deep-voiced, active in body and mind, an expert horseman, the finest equestrian the state can boast, says Stuart, not even excepting General Steele.

-source of bio. & photo: Iowa Its History and Its Formost Citizens Vol 1; by Johnson Brigham 1915
-transcribed by Roseanna Zehner 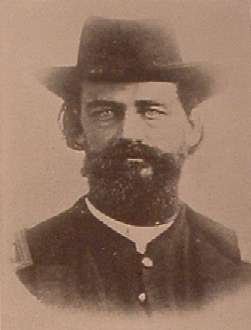