Earle, Willard Chauncy, of Waukon, is one of Iowa's oldest practicing physicians, as well as a leading businessman and politician. He has lived in Waukon between forty and fifty years, ever since 1854, and has probably done more than any other one man to promote the welfare of the city. He is of Puritanic ancestry, tracing his lineage back through seven generations to Ralph Earle, who settled in Massachusetts during the seventeenth century. Dr. Earle's father, Calvin Earle, was born February 1, 1790, in Hubbardstown, Mass., and was a man of great energy and thrift. He was married July 19, 1814, to Betsey Foster, and during the early 20's moved to West Troy, N.Y., and from there to Honesdale, Pa., where he built the first frame house in the town. He returned to Massachusetts in 1840, and came to Waukon, Iowa, in 1858, where he died in October, 1872. His wife ded in 1870, aged 72 years.

Dr. W.C. Earle was born October 7, 1833, at Honesdale, Wayne county, Pa. He received a common school education, and attended Westminster, Mass., academy from 1850 to 1852, where he was prepared to enter Brown university, but on account of poor health had to postpone further attendance at school. He was advised by the family hysicians to go west, and accordingly came to Allamakee county, Iowa, in 1854, at the age of 21. The last part of the journey was made by boat up the Mississippi river. The steamer was so crowded with passengers that many were unable to secure berths, and young Earle, with numerous others, had to sleep on the floor of the cabin. During the last night of the trip his pockets were picked, so that when he arrived at Lansing he had not a cent of money. He was loaned a half dollar by D.W. Adams, and with this paid for a ride in a farmer's wagon to Waukon, where he soon secured work in a sawmill, which he afterwards owned and operated, together with a flouring mill.

Dr. Earle enlisted October, 1861, with the Twelfth Iowa infantry, and was made captain of Company B, which was recruited almost entirely in Allamakee county. He was in the engagements at Ft. Henry, Donelson and Shiloh. At Shiloh he was taken a prisoner, and was held over six months. He was finally released in exchange for rebel prisoners at Jackson, Miss., and his company was one of the very first to enter that city. Here they were in several skirmishes, and then went by forced marches to Champion Hills, and then took part in the siege of Vicksburg, after which they followed the confederate army back to Jackson. Not long after this Captain Earle was detailed by Adjutant-General Thomas to raise on recruit a regiment of colored troops. This he did, knowing at the time that it was sure death to all officers of colored troops captured by the confederates, ad was fially mustered out of service as colonel of the Seventieth United States Colored regiment, October, 1865.

After the war he returned to Waukon, and the followig winter attended lectures at Rush Medical college, at Chicago, and later, Jefferson medical college, at Philadelphia, from which he graduated in 1867, and has practiced at Waukon ever since. He also does an extensive business in general merchandise, and in 1878 built the block in which his store is situated, at a cost of $15,000. He holds much valuable real estate, including several farms, on one of which is situated the Oak Leaf creamery, which he built in 1879. He has been identified with the location of two railroads at Waukon, one in 1854 , the P. Ft W. & C., for which he helped survey, and the W.& M., in 1877, to which he contributed more liberally than any other man in the community.

~source: Biographies and Portraits of the Progressive Men of Iowa, Leaders in Business, Politics and the Professions; 1899, Volume I

Willard C. Earle
Representative from Allamakee county, was born in 1833 in the first frame building built at Honsdale, Pennsylvania.

He moved with his parents to the old homestead in Hubbardston, Massachusetts, in 1840. His parents were Calvin Earle and Betsy Foster; Calvin Earle, six removes from Ralph Earle, who came to this country from England in 1834 - old Puritan stock.

Mr. Earle spent his boyhood days working on the old farm, going to district school, select school and academy, and teaching school in the winters.

In 1853 he was with his brother in Ohio and Pennsylvania, employed in civil engineering, and in 1854 he went to Waukon, Iowa, which has been his home ever since. Here he first worked in a sawmill, which he afterwards owned and turned into a flour mill. He built the first creamery and cheese factory in the country (sic).

In 1861 he enlisted in the army; was elected captain of Company B, Twelfth Iowa Infantry. In 1863 he raised and commanded the Seventieth United States Colored Infantry. In 1865 he resigned to attend medical college.

Graduated from Jefferson Medical College, Philadelphia, Pennsylvania, in 1866-1867 and returned to Waukon, Iowa, where he practiced medicine successfully for twenty-five years, during the time being associated with his father-in-law, Dr. I.H. Hedge, in a drug store; also with his brother, J.W. Earle, in the grain and stock business, and with Mr. Knudtson in a general store. He invested his earnings in farm lands around Waukon.

He spent much time and great energy in building a "plug" railroad into Waukon, which was completed in 1877.

The photo is from the 1st source (Progressive Men) 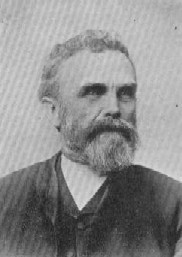