Lansing, a quiet little Iowa town of about fifteen hundred souls, nestles peacefully among the hill away up in the northeast corner of the state where the Mississippi on its way to the Gulf cleaves the sheer rocky cliffs and prevents Iowa from being a part of Wisconsin, or if you have the Badger point of view, where a bit of lovely Wisconsin has vaulted the mighty river and established itself on the plains of the Hawk Eye state.
It was in this rarely beautiful region that the Bakewell and Phillippi families settled in the pioneer days, for I am told they number among the oldest families in that locality. And my mother often (spoke)of how they cleared the land, built their log house, and of their intercourse with the Indians. The Phillippi homestead was about two miles north of Lansing and it was there that my mother was born and spent most of her life. The Bakewell estate was located about ten miles west of Lansing. The forty acres of land upon which the little town of Church (Calhoun) has grown up was at one time a part of the estate; and Granpa Bakewell donated the site for the Calhoun school-house.
After Granpa Bakewell died my father rented the farm and finally bought it in shares. It was on this place that my father, John W. Bakewell, and my mother, Catherine Phillippi, started housekeeping after their marriage which took place in Lansing on October 26, 1880, at Immaculate Conception Church, they being the first couple united in holy wedlock by Msgr. Haxmeier after his coming to Lansing that same year.
My mother came of good Catholic parents, but my father had not been brought up in the Catholic religion, in fact he did not follow any particular sect. His mother was a Catholic and had the children baptized but they did not receive Holy Communion until they were grown up. My father received instructions and Communion just before his marriage. Thus it was that he never (knew) his religion very well and consequently often found it difficult to practice it. It was my mother who encouraged him and urged him to keep up his religious duties. And it was through her efforts that the children received as much instruction as they did in the Faith, though I must give my father credit for not having interfered and for having given as much aid as could be expected from him.
From what evidence I can gather, it seems that my parents built a house on another part of the farm; it was a log house, crude and simple, but considering the time and circumstances, it was all they could afford. It was there that the five children were born, I being the youngest.
My mothers piety inspired her to consecrate all her children, while yet unborn, to the Blessed Virgin, and offer them to God to serve Him in the religious state if He so willed; accordingly, before my birth, she one day made her Confession and received Holy Communion in the Sister's Chapel in Lansing and then made the offering and consecration. She often told me about this, and I reminded her of it when I desired to go to the Convent and she seemed reluctant to make the sacrifice.
I was born within the Octave of the Assumption, on August 21,1892, on a Sunday at four o'clock in the morning. My mother often said that I was so homely that she was ashamed to show me to the neighbors who called to see the new baby. But if I was a homely baby, [NB words in ()are hand written edits by an unknown author.]
I certainly could not have been a sickly baby, for they were not in a hurry to have Baptism administered. I received that first and
life-giving Sacrament on the day after the Feast of Our Lady Ransom, September 25, 1892, over a month after my birth. They delayed so long because we lived so far from the church and my mother had to wait until she was able to take me herself, for it seems there were no Catholics living in the vicinity. Thus from the very dawn of life God was patient and dealt mercifully with me as He has so often done during all the ensuing years.
In Baptism I was given the name Catherine Margaret, after my two Grandmothers, and I have chosen Saint Catherine of Alexandria and Saint Margaret of Cortona as my patron Saints, because I hope that by imitating, as far as permitted, the penance practiced by the one, I may be able to follow the other in her observance of chastity and virginity. My sponsors at Baptism were Grandma Phillippi and Uncle Mathias Phillippi.

That continual out-dooor life kept me in health, for I was seldom sick. The measles, chicken-pox, and an occasional sore throat or bruised finger were the worst ills I ever suffered.

Sleep that wakes in laughing day

~I originally hand copied this some time in the mid 1950s because my grandmother had said that after I read it she was going to destroy it. A cousin of mine typed it and circulated it in 1982. Last year, 2010, I received a typed copy from the archives of the Franciscan Sisters Of Perpetual Adoration. The above is a reedited version restoring some of the misspellings and original grammar that may have been changed in the other versions. Respectfully Ambrose F. Owens 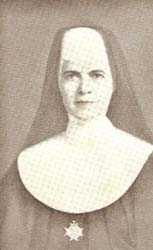