John Pearl Ellis, Postville blacksmith, holds the record among local business men for continuous service to his customers in one location and for continuous years in the same line of business.

Mr. Ellis (everybody calls him Pearl) was born back in 1878 on the farm now owned by Fred J. Heins, a few miles west of Postville and came to town when he was seven years old. In 1893 he went into the blacksmith shop to learn the trade from Thomas Shortreed and after serving a seven year apprenticeship bought an interest in the Shortreed business. This partnership continued for eight years and in 1908 Mr. Ellis purchased the entire business and has conducted it since as sole owner.

He has seen many changes come to his line of business. Where years ago the biggest run of work of the smithy was shoeing horses and resetting tires on wooden wagon wheels, today's trend is toward a general machinery business, tractor work and electric and acetylene welding. Mr. Ellis recalls the olden days when they had mostly horseshoeing work. "Take the springs of 1913 and 1914; for three months we had an average of 114 horseshoes a day to set. In a five weeks period we averaged 132 shoes per day." Pearl told us. "I had the first electric motor in Postille actually hooked up and operating my machinery. That was a big help from the old steam engine we used when I first started at the trade. In those days mostly all work was done by hand. Now we do most of it by the help of power-driven machinery, even to much of the anvil and forge work."

Mr. Ellis remarked that while many communities have seen their blacksmiths close up shop for lack of work, he has had a better run of work this spring and last than for a number of years past. "It keeps us busy repairing farm machines and tractors. And sometimes we even get called upon for the silliest kinds of repair jobs. We don't turn them down, either. We might do a bit of cussing about it, but we give our customers service and will take any kind of repair work they call for. that's what we're here for and whether we like the particular "fussy" job or not, b'gosh we'll get it out."

Mr. Ellis will celebrate his 48 years in business here in June. Associated with him in the shop is his son, Clifford, who is in charge of the welding department. At present the Ellis shop is being flooded with inquiries about the new type two-wheeled hay wagon of which they have made several and one of which is on display at the Hall Roberts' Son elevator.

The wagon is constructed to hook onto a tractor and will covey approximately two or three times as much hay as does the old type hay rack. the hay can either be forked from the wagon directly into the barn or stack or the load may be dumped on the ground for mowers to fork away which allows the wagon crew to go to the meadow for additional loads. It is self-tripping and durable in construction. "We're not a manufacturing plant," Mr. Ellis told us when we asked him if he expected to go into the business of turning the new hay wagons out on a large scale, "but we'll make them for any of our customers who might want one."

Mr. and Mrs. Ellis are the parents of seven children and take great delight in their grandchildren, of which they have 16 at present.

J.P. Ellis, local blacksmith since 1893, is retiring from business. "Pearl" holds the record of local business men for continuous operation as well as for having been in the same location in one and the same business. He is turning his business over to his sons, Clifford and Kenneth June 8. "That's the day I complete 55 years of blacksmithing. I want to make it even years."

Clifford has been associated with his father in the smithy for 22 years. Kenneth came "back home" last winter after a number of years of farming in northern Wisconsin. He is no stranger to the Ellis shop and the work it is requred to handle, because he learned the trade under his father before going to Wisconsin.

Mr. Ellis comes from pioneer stock. His father came to Postville 100 years ago and several additions to the Town of Postville bear his name to this day. Pearl learned the blacksmithing trade from Thomas Shortreed. He has seen many changes, in Postville, as well as in his line of business. Time was when the blacksmith shop of any town was the center of activity. It was where farmers assembled to have their horses shod, wagon tires reset and general machine repairing cared for. Today all of that has changed. the few horses remaining on farms are shod out on the farm. the smith takes his tool kit, much like a doctor takes his medicine case on calls, and goes to the farm to do the job.

Mr. Ellis was born on a farm, now the Fred J. Heins place west of Postville. His first love is in farming. "I'm going to look after my farm northwest of town and take it easy." he says. "Of course, I'll have to hang aroung the shop too, to see that these young squirts keep on turing out the class of work I taught them and the kind the farmers around Postville have become accustomed to getting from old J.P.," he concluded whimsically.

One of the oldest businesses in Postville is the Ellis Blacksmith Shop, which dates back to may 1873, when Jonathan and Lucetta Ellis, along with Hazelton, Stiles and Prescott were in partnership. This property was known as Ellis & Co., second addition of Postville. The property changed hands a number of times, in 1876 Sheldon Candy took over, then G.W. Stafford. He passed away leaving the property to his wife, Mrs. G.W. Stafford. In 1892 Thomas Shortreed acquired it from Stafford's widow. In 1893 J.P. Ellis worked in the shop, and after an apprenticeship of 7 years he bought an interest in the business. In 1908 he purchased the entire business. In 1948 J.P. Ellis turned the business over to his sons, Kenneth and Clifford. In 1948 Kenneth purchased the business. 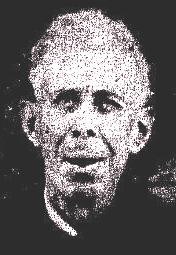