August 7, 1841, Thomas Baird Douglass was born in Glasgow, Scotland. At the age of nine he came with his parents to Waukon, Iowa.

October 2, 1862, at the age of twenty-one, Thomas enlisted in the 27th Iowa Infantry of the Union Forces. During the fighting in the Civil War, he was captured and taken to the Andersonville Prison in southwest Georgia. Fortunately, he was able to tunnel his way out of this infamous prison. Private Douglass mustered out of the Union Army in December, 1864, and became a proud member of the Grand Army of the Republic.

December 12, 1868, Thomas returned to Iowa, married Matilda Hannah Ewing and had a family of eleven children. The wanderlust and the desire for a better life led him and his family from Iowa to Omaha, Nebraska; Sidney, Montana; Ogallala, Nebraska and finally in a covered wagon pulled by an ox-team to the Dakota Territory near the present Box Elder.

On a tract about ten miles east of Rapid City on Box Elder Creek, he took up a homestead and timber claim. This homestead was about 360 acres of some of the most fertile land in the valley with Box Elder Creek running through it. He raised livestock, horses, cattle, hogs, chickens, wheat, flax, corn and garden vegetables.

Besides farming, he was a mule skinner - he freighted with a ten-mule team from Pierre to Deadwood. Consequently, he became friends with such personalities as Calamity Jane and Wild Bill Hickock. He was an entrepreneur as he also had the contract to grade the streets of Pierre. During all these transactions he became acquainted with "old timers" such as Bill Cody and Granberg Behrens. Because the Douglass family had brought an organ with them, the only one for miles around, guests such as Buffalo Bill had many enjoyable evenings singing and listening to the music of this organ.

Linguistically gifted, he spoke Lakota fluently and was a friend of Chief Sitting Bull, Red Cloud, and Crazy Horse who had been born on Box Elder Creek. Nevertheless, he joined other Civil War veterans at the Battle of Wounded Knee.

Thomas Baird Douglass had the nickname "Lonesome Tom" because he was the only Republican in his precinct. Nevertheless, this was no deterrent to getting a school for his family. He got the farmers in the area interested and together they built a one-room wooden structure so their children could learn the threes Rs. April 21, 1891, the Douglas Precinct school, our present Douglas School District, was formed. Thomas's daughter, Cassandra Eberly, remarked in 1961 while visiting the Douglas School System that her father would have been "awfully proud of the Douglas School System because he was so interested in education."

July 5, 1890, Thomas's wife, Matilda, died at age 40. The family continued to live near Box Elder two more years before they were forced to separate and sent to live with various relatives. Thomas is buried in Missoula, Montana, where he was killed by a train May 2, 1902.
_____________________________________________
-source: Douglas, S.D. School District website
-re-posted on Allamakee co. Biographies with permission of Bert Twiggs, Network Coordinator
Douglas (S.D.) School District and current school Superintendent, Dr. Joe Schmitz (who was the superintendent of the Waukon schools before he moved to the Douglas school system) 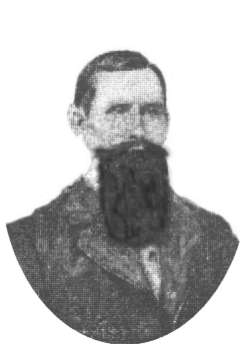