William E. Gardner was born in New York and was a 33 year old resident of Lansing, Allamakee County, when he enlisted in the military. The Roster for the 21st Infantry lists him as an "unassigned recruit" and also references the 12th and 27th Infantries. The Roster for the 27th Infantry indicates he enlisted October 26, 1864 in Company B and was mustered in. On November 11, 1864 he was transferred to the 12th Infantry and served until he was mustered out November 11, 1865 at Montgomery, Alabama. This indicates he saw no service with the 21st Iowa and about 9 months service with the 27th Iowa.

Having enlisted in October 1864 he likely rendezvoused with the 27th Iowa at St. Louis where it arrived on November 18th. From there they went up the Cumberland River to Nashville. On the first day of the Battle of Nashville in which Union forces under Thomas met Confederate forces under Hood, Gardner's Company B was deployed as skirmishers and on the second day participated in the assault on the Confederate line that resulted in a Confederate surrender. In March and April 1865 they participated in the campaign against Spanish Fort and Fort Blakely in Alabama that led to the capture of the City of Mobile.

- source: Roster of Iowa Soldiers (no other information given with this submission)
- source of photo: unknown, sent by transcriber
- transcribed by: Leland Thomas 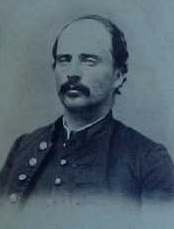