Claudette Bassler
The First 100 Years Are the Hardest!
by Joan Mulligan

March is a special month for Claudette Bassler because not only does she honor St. Patrick on the 17th, or because her mother's maiden name was Hogan, but also because her 100th birthday will be celebrated on Friday, March 9! She was born in Harpers Ferry, Iowa in 1907. Her father was a doctor who was thrilled to have twins whom he named Claude and Claudette. Later, his son would become a doctor at Milwaukee County Hospital and eventually die of tuberculosis which was considered an occupational hazard to M.D.'s and R.H.'s in those bygone days!

Claudette had two sisters who also proved that female longevity was a Bassler family trait. Bernadine lived at San Camillo until her death, and Geraldine is 94 years old and lives at an Iowa Health Center.

At Mercy Hospital in Dubuque, Iowa, Claudette graduated from the three year course in Nursing and then did private and general duty. In 1941 just before Pearl Harbor, she entered the Army Nurse Corps. For six months she was stationed in a hospital unit in Brisbane, Australia. During her service years, she was sent to New Guinea and other South Pacific islands and finally ended up at Palawan Isle in the Philippines. While in the capital city of Manila, the U.S. order came to go to Japan. Luckily, the explosion of the atom bomb immediately brought an end to the fighting in World War II.

Claudette had been stationed in the South Pacific for four and one-half years without a home leave! Wearily, she boarded the Emily Weder Ship that took a month to reach America. Upon her return, she entered the Army Air Force as a career nurse and did general duty at many U.S. military bases before retiring from active duty in 1967. Seventeen years ago, she entered San Camillo [Wauwatosa, Wisconsin] and now resides in Apartment 803.

~the photos & biography were contributed by Renee Conley. The biography is from a page in "Campus Lights", that was displayed at Claudette's funeral. Claudette Mary Bassler, daughter of Dr. Benedict and Gertrude (Hogan) Bassler, died at age 100 on January 5, 2008. She was a first cousin of Renee's mother Clementine Helen Bassler McNamer Koenigsfeld (deceased June 1, 2004).

~Another photo of Claudette in uniform can be found with her entry on the WWII Honor Roll on the Allamakee co. IAGenWeb 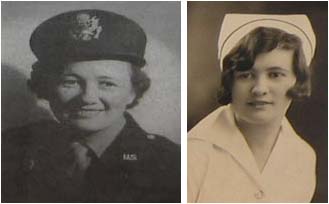