Gullik O. Blakestad was born in the town of Beloit, Rock County, Wis., March 15, 1852, and came to Mitchell County, Iowa, with his parents in the spring of 1854; received a common school education, and grew to manhood on the old Blakestad homestead in Mitchell County, Iowa. He assisted his father in the management of the farm, and later on purchased the old family home where he continued to reside until his death, April 13, 1905.

Mr. Blakestad was a thrifty and successful farmer, a respected and useful member of the community in which he lived. Mr. and Mrs. Blakestad were members of the Lutheran Church, always ready to do their share in the upbuilding and support of the same. To Mr. and Mrs. Blakestad three children were born: Sophia Bertina (b. 1875 & died Dec. 19, 1891), Laura Otilia & Otto George (b. Aug. 10, 1879)

Laura Otilia, born in Mitchell County, Iowa, at the old Blakestad homestead, January 22, 1878. She received a common school education and continued her residence at the parental home, assisting her mother in the care and management of the household duties of the farm. In 1897, she married Theodore S. Buringrud of Allamakee County, Iowa, and they continued to make their home with her parents for over a year thereafter. To them one child was born, Gaylor Joseph, born Dec. 31, 1897. The husband failing to support the family, Mrs. Buringrud sought and secured a decree of separation in 1898. Since that time she has lived with and kept house for her mother. Her son lives with her and is now attending school. 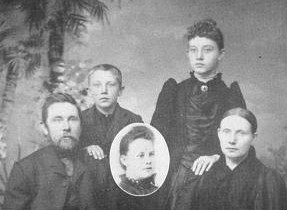