Laton Alton Huffman (1854-1931)
His ancestors were frontiersmen who scouted with Samuel Brady and fought the Delawares alongside Lewis Wetzel on the Ohio. Raised on a farm, he studied photography in his father's studio at Waukon, Iowa. He opened a studio of his own at twenty-one in Postville, Iowa. In September 1878, he took passage on a wagon train headed for Colorado, but turned back in Northern Kansas when nearly attacked by Dull Knife's warriors who were racing ahead of the 4th Cavalry. He met scout Hi Bickerdyke for the first time when the scout stopped at his wagon after the battle of Punished Woman's Fork. By 1880 he settled at Fort Keogh, Montana, apparently by way of western Kansas. There he resumed his friendship with Bickerdyke. Taking over a studio at the post, Huffman became a noted frontier photographer.

Laton Alton Huffman
L. A. Huffman learned photography from his father, P. C. Huffman and worked in his studio in Waukon, Allamakee County, in the early 1880s. Imprints show: P. C. Huffman & Son. He later went on to be a famous Western photographer. From 'Photographing the Frontier', by Dorothy and Thomas Hoobler, page 134-135: Morrow's successor at Ft. Keogh was Laton Alton Huffman, a young man of twenty-five. When Huffman was eleven, his father operated a photographic studio in Waukon, Iowa. Huffman learned his father's trade, but led a footloose early life. He spent his teenage years working as a wrangler on horseback, became a surveyor for the Northern Pacific Railroad, and in 1878 worked in the photographic studio of Frank Jay Haynes at Moorhead, Minnesota. At Ft. Keogh, Huffman received no salary as post photographer. His income came from the sale of pictures. He also doubled as a guide for hunting parties, sold buffalo hides, and started a small cattle ranch. Hoffman's studio at the fort became a congenial gathering place for soldiers, scouts, and Indians who relished an hour or two of conversation with a drink and a cigar.

PHOTOGRAPHS! L.A. HOFFMAN manufactures shadows in the latest style of the art.

Include the following copyright statement with the photo: You may view, copy, print, and distribute this Web site subject to the
following conditions: (a) the site may be used for informational purposes only; (b) the site may only be used for non-commercial,
non-profit purposes and (c) any copy of this Web site, or portion thereof, must include the following copyright notice: Copyright, Antram
Enterprises, 2020 Bickford Ave #30, Snohomish, WA 98290, USA. All rights reserved.
http://milescity.com/terms/ 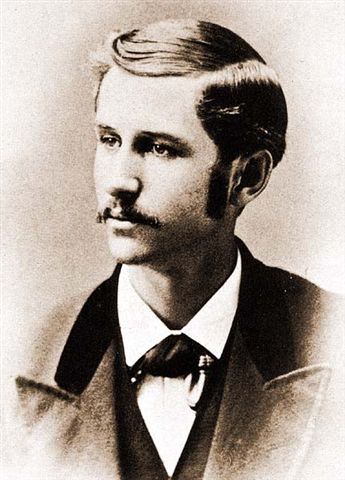