From Biographical History of Montgomery and Adams Counties, Iowa 1892-

Laird V. Richey, who resides on section 2 in Nodaway township, is the earliest settler of this county now residing in Nodaway township. He was born in Richland county, Ohio, August 28, 1830. His father was Joseph Richey and his mother's maiden name was Martha Laird. Joseph Richey was a native of Pennsylvania, and his father, the grandfather of the subject of this sketch, also named Joseph Richey, was a native of Pennsylvania. Joseph, Jr., went to Richland county, Ohio, when a young man, and began the clearing up of a farm, and was married there to Martha Laird, who was born and reared in Ohio. The mother of the subject of this notice died in 1832 at the birth of her third child. The husband and father died in 1835. Mr. L. V. Richey is the only representative of his father's family living. On the death of his father, a cousin was appointed his guardian, with whom he lived for many years - in fact, until he was married and sought a home of his own. He received a good common-school education, and at the age of nineteen years began to learn the trade of carpenter, and this trade, with building, has been his chief occupation through life.

On the 17th of June, 1852, he was united in marriage with Miss Sarah Wolfe. In the fall of 1853 Mr. and Mrs. Richey came to Mount Pleasant, Iowa, and the following spring to Adams county, settling on a piece of land in Mercer township. He and his wife were not only the first settlers of what is now Mercer township, but also of the east half of Adams county. Mr. Richey entered first, 160 acres of timber in what is now the township of Prescott. The following year he sold the greater part of this land, and with the proceeds paid the entry fee of a quarter section of prairie land in Mercer township. On this land Mr. and Mrs. Richey lived until 1859, when Mr. Richey sold his land and removed to Corning and engaged in building. There he and his wife lived until the fall of 1871, when they removed to their present location in Nodaway township. In connection with his farming interests Mr. Richey has continued the occupation of building. He has probably erected as many buildings in Adams county as any other builder.

Mrs. Richey was born in Knox county, Ohio. Her father was Andrew Wolfe, and her mother's maiden name was Saloma Garver. The former was a native of Pennsylvania. The latter was born in Germany, but came to America with her parents when a child of but eight years. Mr. Wolfe settled in Ohio, and continued to live in that State until death. At the time of death he and his wife were residents of Sandusky. Mrs. Richey was one of a family of eight children, consisting of three sons and five daughters, several of whom are now deceased. Mrs. Elizabeth Barnett, wife of John Barnett, of Douglas township, is a sister of Mrs. Richey. Mr. and Mrs. Richey have had nine children, six sons and three daughters, namely: Elizabeth E., wife of Granville Overhulse; Mary I., wife of John Lemon; Sarah I., wife of William Peryman; the eldest son in Charles D., and the others are John L., Samuel M., Frederick E., Joseph T. and Ira E.

Mr. and Mrs. Richey suffered all privations incident to a pioneer life. They came to the county with two covered wagons, which constituted their residences for about a month. By that time Mr. Richey had erected a log cabin with a puncheon floor, built in the truly primitive style of the pioneer days. Later Mr. Richey erected a hewed log house, where the family lived in comparative comfort. Mr. and Mrs. Richey have a pleasant home, where they now reside, in the enjoyment of the comforts of life; but their recollections of early trials and tribulations incident to their early settlement are vivid in their minds, and will ever remain so. The wolf and the deer in the early days were numerous, and were so unused to the appearance of man as to have but little fear of him; but the fertile farm has taken the place of the forest, and the prairie land is turned to cultivated fields. For the long period of thirty seven years have Mr. and Mrs. Richey been residents of Adams county. They have reared a large family of children, all but one of whom was born in Adams county. It may be mentioned as a remarkable fact that through all the privations of the pioneer days, and during later years, the family of Mr. and Mrs. Richey have all been spared, no death having occurred in that family during their married life. A parallel case can hardly be found in Adams county, where so large a family, the greater part of whom have reached mature years, have lived so long without bereavement by death. Mr. and Mrs. Richey are numbered among the well known and esteemed citizens of Adams county, where they have lived so long. Politically Mr. Richey was a Republican during the troublous war times, but later, as new issues came up, he saw his duty elsewhere and has voted with the Democratic party. He and his wife are faithful and consistent members of the Advent Church. 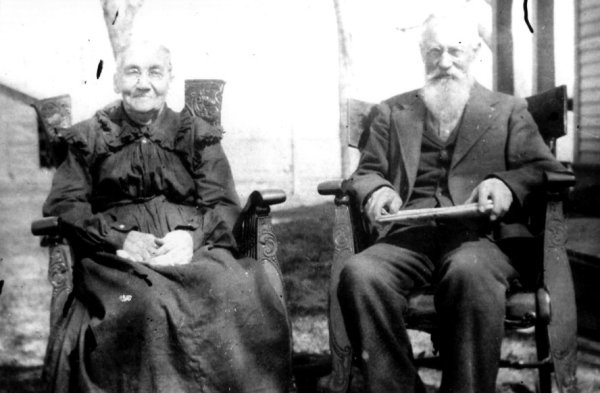